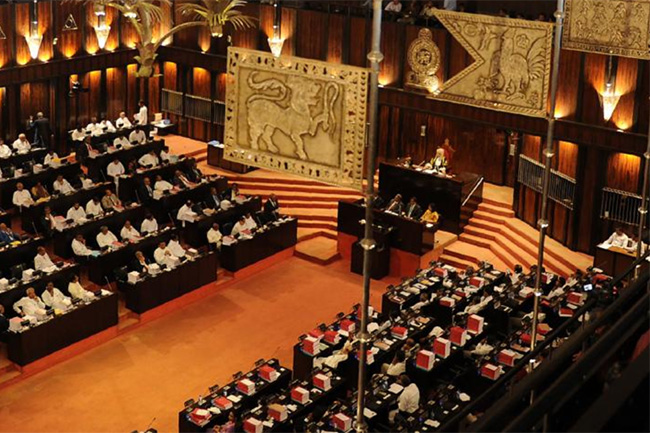 Sign language interpretation to be offered during 2022 Budget Debate

The Committee on Parliamentary Business chaired by Speaker Mahinda Yapa Abeywardena has decided to approve providing simultaneous sign language interpretation during the 2022 Budget Debate in consideration of the Hearing-Impaired Community, the Secretary-General of Parliament, Dhammika Dasanayake said today.

The matter proposed by the Speaker was taken up at the Committee on Parliamentary Business to which approval was granted for a simultaneous sign language window broadcasted parallel to the live telecast during the Budget Debate.

The Parliament will convene at 10.00 a.m. on November 09, and the session is expected to continue until 5.30 p.m. The Adjournment Debate by the Government on the three Reports presented to the Parliament by the Committee on Public Accounts on 20th July, 6th and 7th October 2021 is scheduled for the said date.

It was also decided to set aside the entire day on November 08 for Questions for Oral Answers. Time has been allocated from 10.00 a.m. to 5.30 p.m. on the said date for 50 questions which were postponed due to the pandemic situation.

Accordingly, Parliament is scheduled to convene on the 08th, 09th, 10th and 11th and the second reading of the Appropriation Bill 2022 (Budget Speech) will be presented by the Hon. Minister of Finance on Friday 12th at 2.00 pm. Thereafter, the Budget Debate will be held every day including Saturdays, except for Sundays and public holidays, until December 10th.

Time has been allotted for Questions for Oral Answers on November 11 from 10.00 a.m. to 11.00 a.m. Thereafter, from 10.00 am to 4.30 pm Termination of Employment of Workmen (Special Provisions) (Amendment) Bill, Minimum Retirement Age of Workers Bill, Order under the Employment of Women, Young Persons and Children Act, Regulations under the Land Acquisition Act have been scheduled to be taken up on the said date.