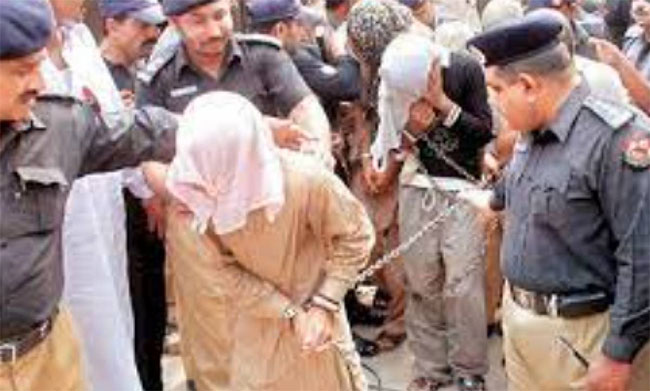 At least 13 key suspects were remanded Sunday to police custody in a case relating to the lynching of a Sri Lankan factory manager in Sialkot, Pakistani media reported.

As of Sunday morning, six more suspects were arrested as well, according to Pakistan’s The News.

With the latest detentions, a total of 124 suspects have so far been arrested, which include 19 key suspects.

The police said that the 13 suspects in their custody will be presented before an Anti-terrorism Court in Gujranwala.

According to the police, rescue services had received the first complaint of the incident when the mob blocked GT Road. They were informed about a ruckus in the factory.

The police said that their personnel leaped the factory’s gate to enter it where they saw a mob beating the factory owner.

“[The police] could barely free the factory owner from the mob, while another group of people entered the factory by leaping the walls,” the police said, adding that the mob opened the gates and dragged the manager’s body outside.

Earlier, the police had said that the suspects were to be presented before a court to seek their physical remand for interrogation in regard with the killing.

Meanwhile, a statement issued by the spokesperson of Punjab Police said that the new arrests were made with the help of videos of the incident.

“The arrested suspects can be seen torturing the Sri Lankan citizen in the video,” the spokesperson said.

He said that the suspects had been hiding at their friends’ and relatives’ residences .

The spokesperson further stated that the police is using “modern technology for the investigations” and 19 of the arrested suspects are found to have played a key role in the lynching.

He said that Punjab Chief Minister Usman Buzdar and Inspector General of Police are overseeing the investigations in person, while CM Buzdar has assigned the task of case follow-up to the prosecution secretary.

As per the preliminary report, a dispute had emerged when Kumara removed some posters from the walls of the factory at 10:28am. The posters were reportedly inscribed with the name of the Holy Prophet (PBUH).

Shortly after, the factory owner had reached the spot and resolved the issue. Kumara had apologised for the misunderstanding on his part.

After Kumara made the apology, the matter was reportedly considered settled and the factory workers had dispersed.

However, some workers then incited their colleagues to attack the manager.

Within a few minutes, a mob formed and set on the victim within the premises of the industrial unit, eventually killing him.

A total of 13 security guards were present in the factory as the brutal attack was occurring. None of them tried to rescue the victim or disperse the mob, the report had said.

Kumara’s body was later dragged outside the factory.

Police received a phone call at 11:28am about the incident, officials had said. A police party had reached the site within 12 minutes.

The wife of Diyawadana Priyantha pleaded for justice for her slain husband from both Pakistani and Sri Lankan leaders, Sri Lankan news outlet Newswire reported.

“I got to know about the brutal murder of my husband from the news. Later, I saw this on the internet as well. He was a very innocent man,” she said, talking to reporters from BBC Sinhala.

“I request leaders of Sri Lanka and Pakistan to do justice for my husband and two children, by bringing the perpetrators to justice,” she went on to say. The deceased’s brother said that Priyantha had been working in the Sialkot factory since 2012.

Priyantha Kumara, working as a manager at a private factory in Sialkot, was lynched on Friday by a mob after being accused of blasphemy.

The gruesome incident was dubbed by Prime Minister Imran Khan as “a day of shame for Pakistan”.

Workers of a garment industry, located on Sialkot’s Wazirabad Road, had alleged that the foreigner had committed blasphemy. He was subsequently lynched and his body set on fire.

The mob had also vandalised the factory and blocked traffic, according to police.

The brutal murder drew widespread condemnation from senior government functionaries, including the prime minister and president, as well as the military’s top leadership, who promised to bring all those involved to the book.