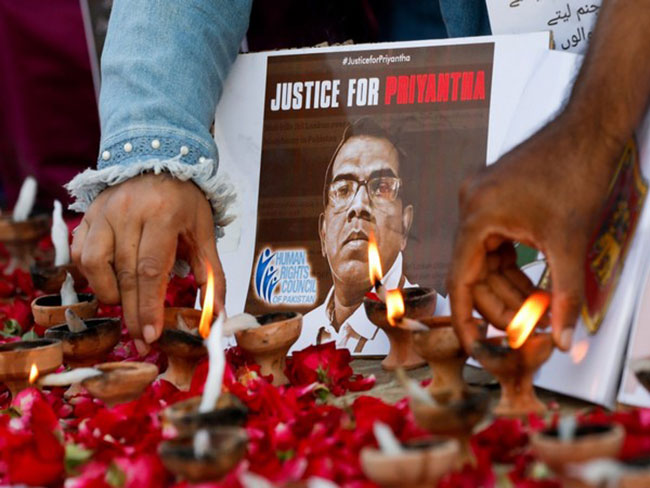 Remains of Priyantha Kumara arrive in Sri Lanka from Pakistan

The remains of Sri Lankan national Priyantha Kumara, who was lynched by a mob in Pakistan’s Punjab province, reached the island a short while ago.

The body was repatriated on Monday, even as Pakistani authorities arrested more suspects involved in the grisly incident that shocked people across the world.

The remains will be handed over to his next of kin today (06) at the BIA, the foreign ministry said.

The wooden coffin has the words: “Human remains of late Don Nandasri P Kumara Diyawadanage. From Lahore to Colombo”, transcribed on it.

A mob of over 800 men, including supporters of hardline Islamist party Tehreek-e-Labbaik Pakistan (TLP), attacked a garment factory and lynched its general manager Priyantha Kumara Diyawadanage and set him on fire over allegations of blasphemy on Friday last in Sialkot district, some 100 km from Lahore.

“The officials of the Sri Lanka High Commission arrived here early Monday morning and the body was handed over to them at the Lahore airport by Punjab minorities minister Ijaz Alam. The body was transported on the Sri Lankan Airlines flight,” a Punjab government official told PTI.

“A total 131 suspects, including 26 main ones, have been arrested so far. The 26 prime suspects have played a key role in inciting the people, lynching Kumara and setting his body ablaze,” the Punjab Police said in a tweet on Monday.

Some 15 prime suspects were presented before the Anti-Terrorism Court Gujranwala on Monday where they were remanded in police custody for 15 days.

According to police, after brutally killing Kumara, the mob also wanted to kill the factory owner and set the building on fire.

“The mob wanted to set on fire the entire factory after lynching Kumara. A group of charged workers headed towards the residence of the factory owner to kill him, but timely action by police prevented further violence,” Sialkot District Police Officer Omar Saeed said.

Earlier, narrating the sequence of the gruesome incident, Inspector General Police (Punjab) Rao Sardar Ali Khan had said: “A mob of over 800 men gathered and attacked the factory at 10 am Friday after reports emerged that Kumara had torn a sticker/poster inscribed with Islamic verses and committed a blasphemy. They searched for him and found him on the rooftop. They dragged him, beat him severely and by 11.28 am, he was dead and the body was set on fire by the violent mob.”

Kumara was working as general manager in Rajko industries, which deals in sportswear, for the last seven years.

The horrific incident sparked outrage across Pakistan with all sections of the society condemning it and calling for the culprits to be punished.

According to the post-mortem report, nearly all bones of Kumara were broken and his body was 99 per cent burnt in the horrific lynching incident.

Kumara had gone to Pakistan in 2011 after he got a job as a mechanical engineer at an apparel factory in Faisalabad. After a year, he joined Sialkot’s Rajco Industries as its general manager and was the only Sri Lankan national working in the factory.

He is survived by his wife and two sons aged 14 and 9.