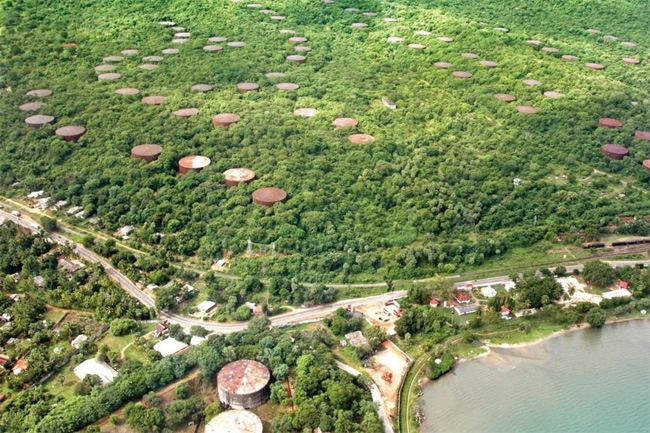 The agreement to jointly develop the Trincomalee oil tank farm with India has been signed this evening (06), according to Energy Ministry sources.

The Cabinet of Ministers on Monday had given its approval to the proposal tabled by the Minister of Power, for the implementation of Trincomalee Oil Tank Farm development project with India.

Thereby, 61 tanks at the oil storage complex will be jointly developed by the Ceylon Petroleum Corporation (CPC) and Lanka IOC as a joint venture.

Lanka IOC is a subsidiary of the Indian Oil Corporation which is under the ownership of India’s Ministry of Petroleum and Natural Gas.

A subsidiary company named Trinco Petroleum Terminal Pvt. Ltd. is slated to be established for the joint development of these 61 oil tanks.

According to the government, the CPC will retain 51% of the shares from this joint venture while Lanka IOC holds on to 49%.

Meanwhile, the Cabinet has given its nod to further lease out Lanka IOC-run 14 oil tanks of the Lower Oil Tank Complex to the company for its business activities.

Additionally, 24 oil tanks will be allocated for the business activities of the CPC as approved by the Cabinet.

Sri Lanka and India reached the agreement to implement a project to jointly develop Trincomalee Oil Tank Farm, after reviewing three existing deals between the countries through diplomatic talks.

The two countries agreed to jointly develop and operate the farm, which consists of 99 tanks, over three decades ago but the entire farm was leased to India in 2003 for 35 years and Sri Lanka was unsuccessful in taking part of the farm as a sublease from Indian state-controlled IOC’s subsidiary Lanka IOC (LIOC) in 2017.

“After reviewing the three existing agreements with the Government of India regarding the Trincomalee Oil Tank Complex through diplomatic talks, the two countries have reached an agreement to implement a joint development project. Accordingly, the Cabinet of Ministers approved proposal presented by the Minister of Power,” the cabinet said in a statement.

Meanwhile India’s External Affairs Ministry Spokesperson Arindam Bagchi today welcomed the move and said this was an “important area of our bilateral cooperation”.

“We’ve seen reports on this. Energy security is an important area of our bilateral cooperation with Sri Lanka,” he said.

Bagchi added: “We are in consultation with Sri Lanka for modernisation of Trincomalee oil tank farms. It’ll allow for fuel storage.”

Finance Minister Basil Rajapaksa was in India last year when food security and energy security were discussed, among other issues.