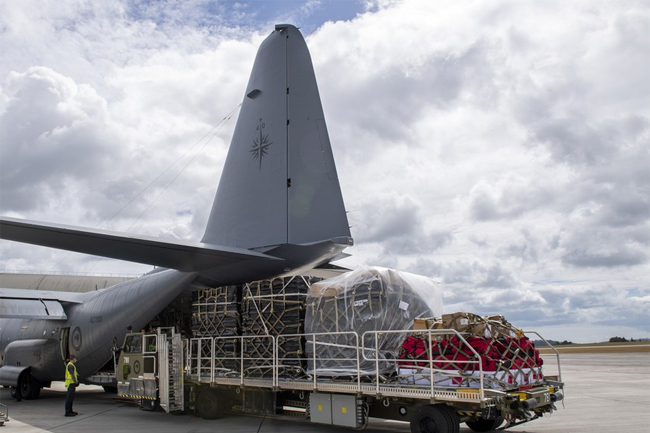 The first contactless aid flights arrived in disaster-hit Tonga on Thursday, as the coronavirus-free Pacific island nation takes precautions to keep the virus out of its borders in the wake of a devastating volcanic eruption and tsunami.

Flights from Australia and New Zealand carrying humanitarian aid and disaster relief landed at Fua’amotu International Airport in Tonga’s capital, Nuku’alofa, after the runway was cleared of volcanic ash and debris following Saturday’s violent eruption of the underwater Hunga-Tonga-Hunga-Ha’apai volcano.

It also comes as a senior Tongan politician warned of potential food shortages in the country.

The aid will be delivered without any contact, to prevent the risk of COVID-19 spreading in the nation -- which has only seen a single case since the start of the pandemic. Tonga has fully vaccinated more than 80% of its eligible population against the disease, according to the World Health Organization.

It was expected to be on the ground for up to 90 minutes before returning to New Zealand, the statement added.

“There is going to be no contact. We have been rigorously disciplined in ensuring that COVID is not transmitted into Tonga,” New Zealand’s commander of Joint Forces, Rear Adm. Jim Gilmour, told reporters.

In addition, the offshore patrol vessel HMNZS Wellington is expected to arrive at the Nuku’alofa harbour on Thursday, ahead of other supply ships, according to a statement from the New Zealand government.

The ship is transporting hydrographic and dive personnel, and has a helicopter to assist with supply delivery, the statement said.

Another navy vessel carrying 250,000 liters of water will arrive in Tonga on Friday, Gilmour said.

Australia has made an initial pledge of more than $700,000 toward Tonga’s recovery effort, Morrison added.

‘All agriculture is ruined’ in Tonga

As aid began to arrive, a senior Tongan politician said Thursday that the island nation could face a food shortage after all its crops were destroyed by the eruption and tsunami -- which sent waves up to 49 feet (15 meters) crashing into the main island, Tongatapu, and the ‘Eua and Ha’api islands.

“All agriculture is ruined and I hear the farmers have been reassured by the Prime Minister that they will be taken care of,” House Speaker Lord Fakafanua told Pacific Media Network.

“But it’s very sad to hear. So on top of the water that we need in Tonga, it seems that we’ll be facing a food shortage.”

Prime Minister Sovaleni said Tuesday that Tonga faces “an unprecedented disaster,” adding at least three people had died and many others were injured.

All the houses on the island of Mango -- where 36 people live -- were destroyed, while only two houses remain on Fonoifua island, and extensive damage was reported on Nomuka island -- home to 239 people, he said.

The island nation of more than 100,000 people was largely cut off from the rest of the world after a key underwater cable was damaged in the eruption. Some smaller islands are still offline, with officials and rescue workers racing to establish communication.

First details of the devastation only emerged on Tuesday after Australia and New Zealand made reconnaissance flights to the archipelago -- a three- to five-hour journey.

The ash, coupled with stagnant water from the tsunami, contaminated water and food sources, according to the Red Cross.

The delivery of aid was hampered by ashfall covering the airport runway, forcing New Zealand to send two navy ships to assist with recovery on Tuesday.

Securing access to safe drinking water remains a critical priority for aid groups, who are concerned about the spread of diarrhea and diseases such as cholera.

The explosion of the Hunga Tonga-Hunga Ha’apai volcano sent shockwaves around the world and triggered tsunami waves that were felt thousands of kilometers away, killing at least two people in Peru.

The volcano sits on the seismically active Pacific Ring of Fire, and is about 65 kilometers (40 miles) north of Tonga’s capital.

The estimation was based on modeling by GNS Science, a New Zealand geological research institute, the ministry said. “The most likely scenario is for ongoing eruptions in the next several days to weeks, with ongoing tsunami risk to Tonga and New Zealand,” it said.