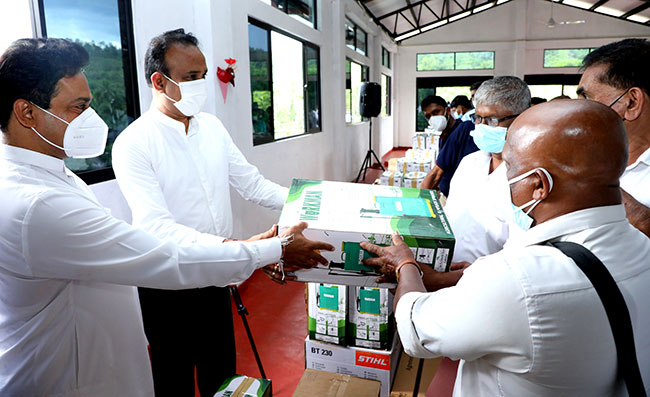 People are not aware of projects implemented by govt - Ramesh Pathirana

Plantation Minister Dr. Ramesh Pathirana states that the government is currently in discussions to provide a subsidy for chemical fertilizers or to reduce the price of fertilizers within the next three months.

He also stated that the government is ready to embark on a new journey in the new year by mobilizing all forces.

He stated that at present the prices of not only fertilizers but also fuel, milk powder, cement and food items in the world market have gone up. H said transport fares have gone up and that the world’s manufacturing economy has collapsed due to the spread of the coronavirus.

“Due to these problems the prices of goods in our country as well as in the world have gone up.” No government in the world wants to increase commodity prices and make people queue up during its rule, the minister said.

“While people in many parts of the world are dying with the spread of the corona virus, people in this country are breathing freely today.” He said the President worked very actively to save the people from this deadly virus. “We can be happy thinking about that.”

“Now we need to move on from here.” This year the plantation sector has a lot of work to do to strengthen the economy of the people, the minister said, adding that all forces are ready to go on a new journey this year.

“But a 50 kg bag of fertilizer costs Rs. 7,200. People cannot afford that price. Although relief cannot be given immediately, the government is taking steps to provide relief in a systematic manner,” Mr Pathirana said.

“We will provide a subsidy for fertilizer within the next two to three months. We are also working to reduce fertilizer prices.”

He said the tea industry in particular is showing signs of improvement. Tea production in 2020 is 279 million kg. “But despite the fertilizer crisis, we produced 305 million kilos of tea last year,” he said. The government will implement several special programs in the future to promote tea cultivation, Minister Ramesh Pathirana added.

“However, the people are not aware of the projects implemented by the government.”

The minister said he allocated Rs. 1.5 billion for a project to provide water for cultivation. But not even fifty percent of that money has been spent, he said.

“The World Bank Loan Scheme will provide US $ 20 million for the development of tea cultivation. We will provide that money to the people through public and private banks.”

The Tea Small Holdings Development Authority has spent Rs. 134 lakhs on this project under the Star project, which will serve about 2,500 tea smallholders in the area.

In addition to collecting green tea leaves, people also have the opportunity to collect and sell other agricultural products including cinnamon, pepper, arecanut, kithul honey and jaggery through these centers.