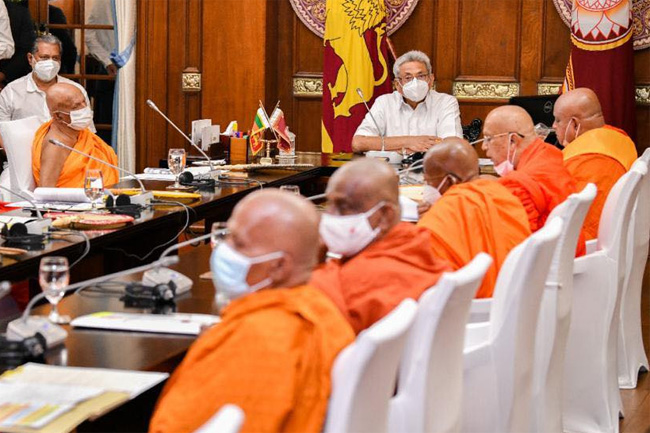 The results of patient and well-planned decisions are now becoming a reality, the Maha Sangha has said, pointing out that it is the responsibility of all parties to unite to achieve the aspirations of people by placing trust in President Gotabaya Rajapaksa as a visionary and pragmatic leader.

These remarks were made by the Maha Sangha during the 12th meeting of the Buddhist Advisory Council held at the Presidential Secretariat, yesterday (January 21).

The Maha Sangha expressed their views at the Buddhist Advisory Council, appreciating the President’s leadership in protecting the people from the COVID-19 pandemic and rebuilding the country in the face of challenges and economic hardships.

The Maha Sangha pointed out that the trust placed in President Gotabaya Rajapaksa as the only leader who was able to save the country, the nation and the heritage that was deteriorating has not been diminished and that the people should be made aware of the steps taken by the Head of State during the last two years to protect the Kuragala Sacred Area, the Muhudu Maha Vihara and other temples in the North and East.

They also highlighted that it should be the responsibility of the Buddhist Advisory Council to provide factual information regarding the issues faced by the people of the country and to assist the President in finding solutions.

The President said he expects the guidance of the Maha Sangha to adopt laws and on national dialogues. He also stated that as the Sinhala-Buddhist heritage, which was on the verge of extinction, was preserved despite the COVID-19 obstacles, steps will be taken to develop those historic sites while continuing the task to fulfil the aspirations of the majority of the people.