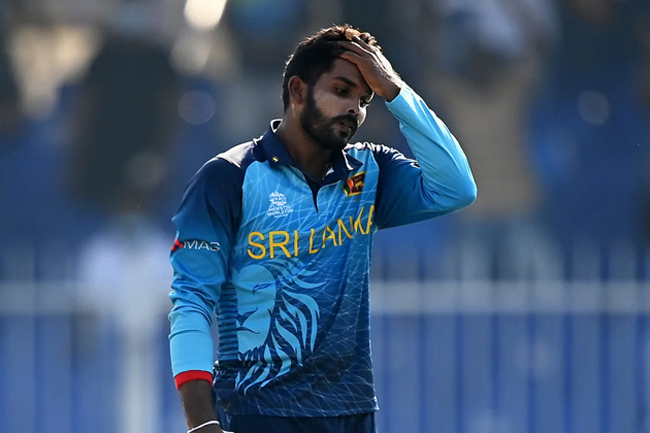 Wanindu Hasaranga to miss out on India tour

Sri Lanka ace spinner Hasaranga, who contracted Covid-19 last week, has tested positive for the virus once again in the latest PCR test.

As a result, Hasaranga will be missing out on the T20 series against India, scheduled to kick off tomorrow (February 24) at Lucknow.

Sri Lanka Cricket (SLC) said that Hasaranga, who was in isolation after contracting Covid-19, has once again, returned a positive result when a Rapid Antigen Test (RAT) was conducted on the player yesterday (22). A PCR test too confirmed the result, it said.

He was first found to be positive during a Rapid Antigen Test (RAT) conducted on the 15th February 2022.

The player was transferred to Melbourne from Canberra and will remain in isolation until he returns a negative PCR Test Report, the SLC said.

Hasaranga was first found to be positive during a routine Rapid Antigen Test conducted on February 15.

After testing positive for novel coronavirus, he was also ruled from the third T20I against Australia. Sri Lanka lost four fixtures of the five-match series, however, was successful in blocking the home side’s attempt to complete a series whitewash.

In the meantime, Avishka Fernando, Nuwan Thushara, and Ramesh Mendis who were in the T20I squad which toured Australia will also be missing out on the India tour due to injuries.

Sri Lanka is expected to play three T20Is against India followed by two red-ball games, starting with the first T20I at Lucknow’s Ekana Stadium on February 24. The next two fixtures are scheduled to be held in Dharmshala on Feb 26 and 27 before the first Test in Mohali followed by a day-night Test in Bengaluru.

--with inputs from agencies