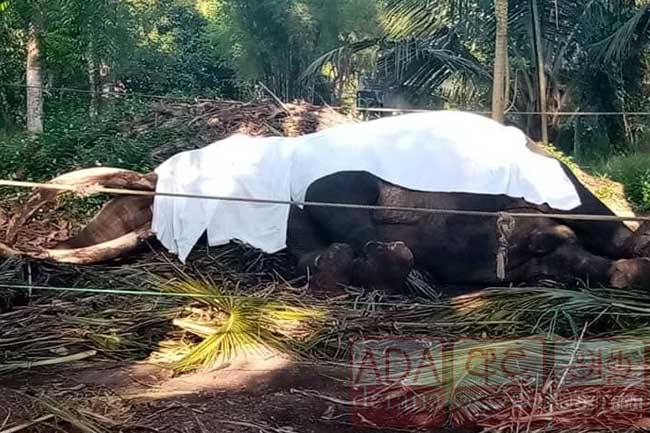 ‘Nadungamuwa Raja’ the tusker which had carried the sacred relic casket of the Kandy Esala Perahera the most number of times, has died this morning at the age of 69 years.

Nadungamuwa Raja, was a celebrated elephant towering around 10.5 feet (3.2 metres) in height, the tallest tamed tusker in Sri Lanka. He has carried the Sacred Tooth Relics Casket at the Esala Perahera for 12 years.

And he had his own armed guards as the government had allocated troops to provide security for this majestic animal as it ambled along main roads to attend temple festivals across the island.

There are two regular handlers with Raja in addition to the military unit deployed to clear a path for the animal when it navigates crowded country roads.

Raja was an unofficial national treasure because he is one of the few tuskers chosen to carry the sacred relic casket of the Esala Perahera, an annual pageant at the most sacred Temple of the Tooth Relic in Kandy.

The tusker used to walk around 90 kilometres to the city of Kandy for the event, called the Esala Perahera. He walked 25 to 30 kilometres a day, travelling mostly at night when it is cooler.

The pageant in August involves nearly 100 elephants and many more traditional dancers, fire-eaters and drummers, and is a key tourist attraction.