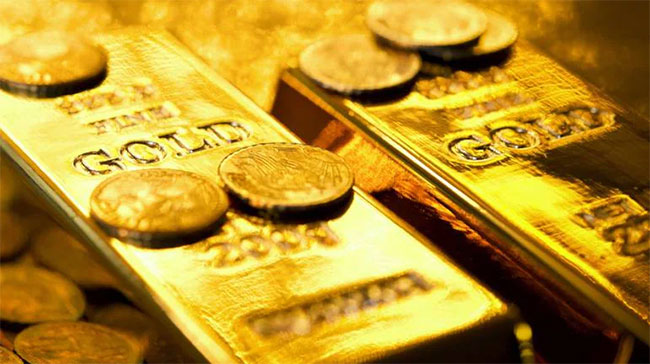 Gold has traded an all-time high of $2,078.80, pushing its estimated market capitalization above the $13 trillion dollar mark for the first time ever, as investors scramble to protect their assets against inflation caused by the ongoing Russian-Ukraine war.

Currently, gold futures is up 0.55%, trading $2,055.70 an ounce. In the Asian session, the yellow metal traded a high of $2,069.89 an ounce, not far from the newly established all-time high. The dollar, which normally moves inversely to gold, is marginally down by 0.09% currently trading 98.98 basis points but remaining near the more than one-and-a-half-year high it reached earlier in the week.

Apart from U.S. and UK banning Russian oil imports, DailyFX strategist Margaret Yang told Reuters that, “there seems to be a lack of further escalation in the tensions between Russia and Western powers. Geopolitical catalysts are the main drivers behind gold, and once the political skies are clear, I foresee gold prices plunging quickly back to the $1,800 levels.”

He further stated, “Gold should continue to do well as intensifying sanctions from the West will continue to drive persistent volatility across commodities which will keep pushing inflation expectations to uncomfortable levels for central bankers.”

U.S. President, Joe Biden announced a ban on Russian oil and other energy imports. Britain also said it will phase out the import of Russian oil and oil products by the end of 2022, giving the market and businesses time to find alternatives.

Asides Gold, other precious metals have been bullish since the start of the war, as investors try to hold on to as much as they can, as a hedge against inflation.

Palladium for example, is up 2.01% as of the time of this writing, currently trading $3,212.47 per ounce. The metal has gained over 38% since the Russian invasion of Ukraine just two weeks ago, hitting an all-time high of 3,417.02 an ounce on Monday.

Russia is a major global producer of Palladium, accounting for over 40% of global exports. ED&F Man Capital Markets analyst Edward Meir told Reuters that Palladium “could move much higher because out of all the commodities, it has the highest percentage share coming out of Russia. Just this week, it took out last year’s high. So, if it’s last year’s high pre-invasion, this tells me that we should be much higher post-invasion.”