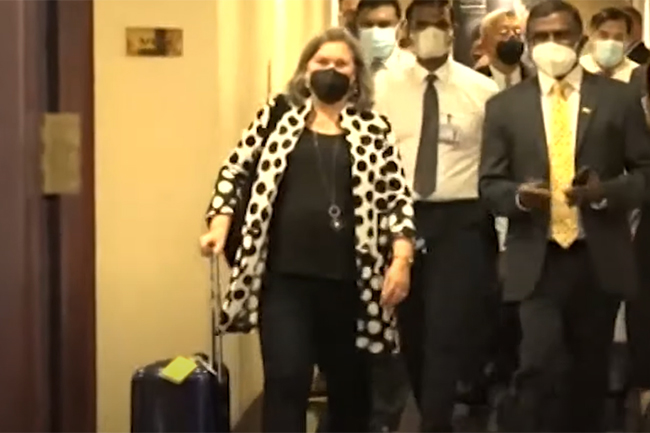 US Under Secretary Victoria Nuland arrives in Sri Lanka

The Under Secretary for Political Affairs of the U.S. Department of State Victoria Nuland arrived in Sri Lanka for a two-day official visit evening (March 22).

Accompanied by a delegation of five senior officials, Nuland arrived at the Bandaranaike International Airport in Katunayake at around 7.30 p.m. today from New Delhi, India.

Newly-appointed US Ambassador to Sri Lanka Julie Chung accorded a warm welcome to the US Under Secretary upon her arrival.

Under Secretary Nuland oversees regional and bilateral policy issues at the U.S. Department of State.

During the visit, Under Secretary Nuland is scheduled to call on President Gotabaya Rajapaksa, meet Foreign Minister G.L. Peiris and Foreign Secretary Jayanath Colombage, the Ministry of Foreign Affairs said.

Minister Peiris and Under Secretary Nuland will co-chair the 4th session of the Sri Lanka – U.S. Partnership Dialogue at the Foreign Ministry on Wednesday, 23 March, 2022. The Partnership Dialogue, an important platform to review bilateral relations and explore avenues to further strengthen the cooperation and partnership between Sri Lanka and the United States, was last held in 2019 in Washington D.C.

In addition, Under Secretary Nuland is scheduled to visit the Colombo Port and meet the business community and civil society.

The Assistant Secretary for South and Central Asian Affairs of the U.S. Department of State, Donald Lu and the Principle Deputy Assistant Secretary of Defense for Indo-Pacific Security Affairs Amanda Dory are among the delegation accompanying Under Secretary Nuland on the visit.

The US State Department had previously announced that the Under Secretary for Political Affairs will travel from March 19-23 to Bangladesh, India, and Sri Lanka with an interagency delegation to underscore U.S. commitment to, and cooperation with, Indo-Pacific partners.

Under Secretary Nuland is to hold Partnership Dialogues in Bangladesh and Sri Lanka and Foreign Office Consultations in New Delhi.

On each stop, Under Secretary Nuland and the delegation will meet with civil society and business leaders to strengthen economic partnerships and deepen ties in the pursuit of peace, prosperity, and security in the Indo-Pacific region.