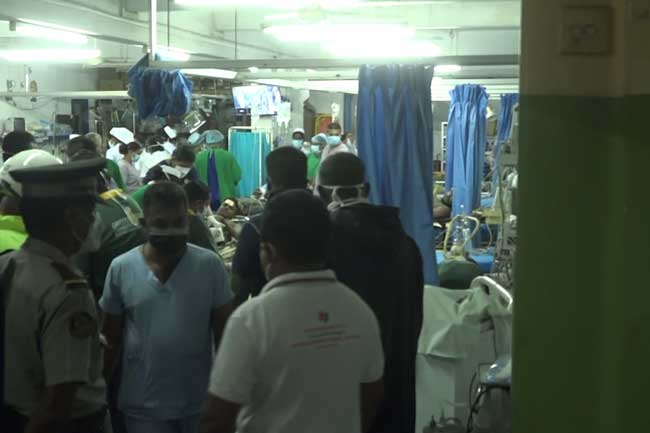 Rambukkana protest: One dead in police shooting, at least 24 injured

UPDATE: The number of people injured during the Rambukkana protest has risen to 24, including eight policemen, the police media spokesperson says.

One person died this evening (April 19) following a clash between the protesters and the police during a demonstration staged in Rambukkana against the recent fuel price hike.

The injured individual, who was rushed to the Kegalle Teaching Hospital, was pronounced dead due to gunshot wounds, the director of the hospital Dr. Mihiri Priyangani confirmed.

In the meantime, 11 other injured protesters who were at the scene have also been admitted to the Kegalle Teaching Hospital. Four of them are reportedly in critical condition.

Ada Derana correspondent stated that one of them is currently receiving treatment in the intensive care unit of the Kegalle Teaching Hospital.

Earlier this evening, it was reported that the police had fired tear gas to disperse the protesters who were blocking the level crossing in Rambukkana for more than 15 hours.

Later, a tense situation had ensured, during which the police opened fire at the protesters.

People in Rambukkana, who were standing in long queues to obtain fuel since early this morning (April 19), had staged a protest in the town, completely blocking the area. They had blocked all entry and exit roads to Rambukkana town, urging the authorities to provide fuel at previous rates.

Vehicular movement on roads and train operations on the Main Line were thereby hindered by the demonstration.

Meanwhile, the United National Party (UNP) said in a statement that the shooting victim is a former member of the party’s Youth Wing.

UNP Deputy Leader, Ruwan Wijewardena, is travelling to Rambukkana to visit the family and the hospital to check on the others who sustained injuries in the incident, the statement read further.

UNP lawyers have also been dispatched to the hospital, it added.