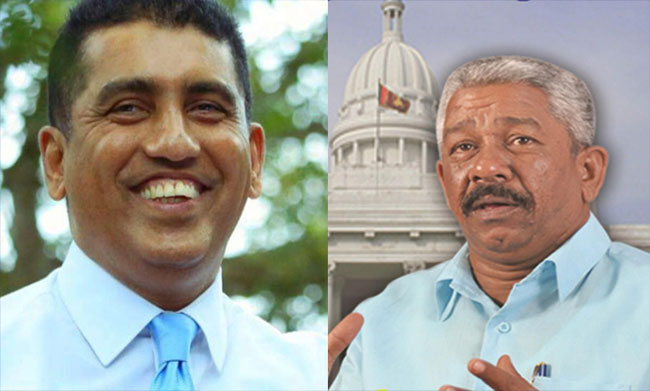 May 9 violence: Johnston and Kahandagama named as suspects

SLPP parliamentarian Johnston Fernando, Municipal Councillor Mahinda Kahandagama and two others have been named as suspects in the case filed over the incidents of violence on May 09 in Galle Face and Kollupitiya.

They have been named as suspects in the case by the Criminal Investigations Department (CID), which is handing the investigations into the attacks on protesters at ‘GotaGoGama’ in Galle Face and ‘MinaGoGama’ near Temple Trees by a group of SLPP supporters.

Additional Solicitor General Ayesha Jinasena, appearing on behalf of the CID, informed the court of this when the case was taken up before the Fort Magistrate’s Court today (01).

The Additional Solicitor General recently informed the court that the Attorney General had recommended to the IGP that senior DIG in charge of the Western Province Deshabandu Tennakoon be transferred to a position outside the province.

Accordingly, the Colombo Fort Magistrate Thilina Gamage had directed the IGP to appear before the court today (01) regarding the non-compliance with the said recommendation.

Police have so far arrested several suspects including MPs Sanath Nishantha, Milan Jayatilleke, Mayor of Moratuwa Saman Lal Fernando and Dan Priyasad in connection with the May 09 attacks on peaceful protesters at ‘MinaGoGama’ and ‘GotaGoGama’.