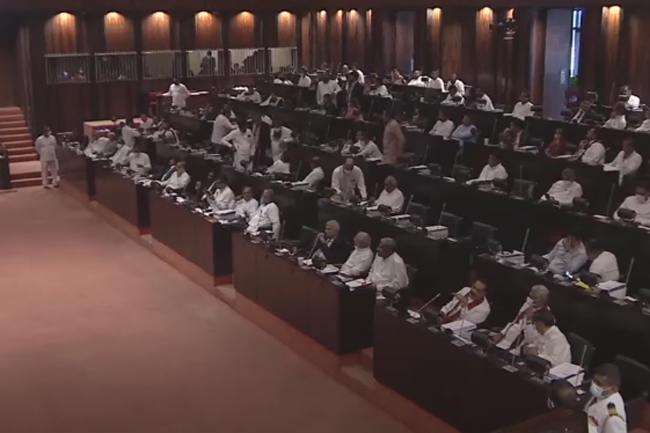 The Sri Lanka Electricity Amendment Bill No. 20 of 2009 was passed in the parliament today (June 09) without committee state amendments, by a majority of votes.

Following the debate on the second reading of the Bill, the Opposition had demanded a vote. A total of 120 votes were cast in favour and 36 were cast against while 13 lawmakers abstained from voting. Accordingly, the second reading was passed by a majority of 84 votes.

Subsequently, during the committee stage, the Opposition objected to the amendment brought by the Minister of Energy to Article 4 and the ruling party had to withdraw the amendment.

The Opposition then went on to call for a vote for Article 4 in its entirety, which was passed by a majority of 70 votes to which 116 votes were cast in favor and 46 cast against.

Accordingly, the Electricity (Amendment) Bill was passed by a majority in Parliament.

This Bill, introduced in Parliament on May 17, 2022 by the Power & Energy Minister, qualifies a person to apply for a generation license to generate electricity.

In addition, Regulations under the Petroleum Resources Act made by the Minister of Energy were approved by Parliament today. These orders were published in the Gazette Notification No. 2249/32 dated 15.10.2021.

These Regulations are referred to as Petroleum Resources No. 1 of 2021 (Minimum Eligibility Orders of the Appointed Members and the Director General).

However, the Ceylon Electricity Board Engineers’ Union (CEBEU) vehemently opposed what it called the “deceitful” amendments to the Sri Lanka Electricity Act, alleging that it is an attempt by the government to entirely abolish the competitive bidding process in electricity procurement from private sector.

The argued the competitive bidding process ensures the right of the general public to receive electricity at the least cost.

In protest of the proposed amendments to the Electricity Act, the CEBEU said it would resort to a trade union action effective from midnight yesterday. The CEB Technical Engineers’ Association meanwhile stated that it would not support the strike, stressing that the strike was unacceptable at the moment.

The trade union action was called off this morning following discussions with President Gotabaya Rajapaksa.

The CEBEU said “a team of corrupt individuals has employed a cunning strategy abusing the Act through these proposed amendments to secure large-scale solar, wind and other kinds of power generation projects which are to be implemented in future among their interested partners at their will without having any competitive bidding process and incurring huge adverse impact to the national economy while they are being profited exorbitantly.

“It is clear that the parties with vested interests want these amendments implemented to entertain unsolicited proposals such as proposals of New Fortress Energy and Adani Group, to gain immense undue financial benefits.”