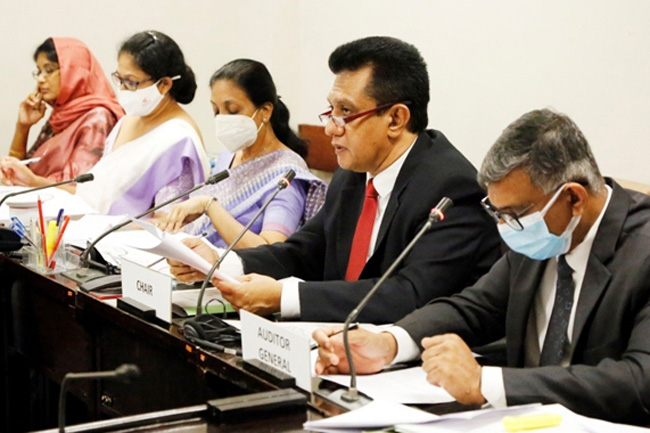 The Committee on Public Enterprises (COPE) has decided to meet separately to hold a special meeting in near future to look into the power generation, procurement, distribution and projects of the Ceylon Electricity Board.

This decision was arrived at when COPE met on Tuesday under the chairmanship of Prof Charitha Herath to look into the Auditor General’s reports for the years 2017 and 2018 and the current performance of the Ceylon Electricity Board.

Earlier on June 10, CEB officials were summoned to COPE to discuss the matter, but due to time limitations on the said date, several issues were not taken up for discussion.

The parliamentarians who were present pointed out that there are discrepancies in what has been said regarding the issues raised during the discussions on purchases, distributions and projects of the Ceylon Electricity Board.

Hence, they requested the COPE chairman to inform the Parliament and the Speaker to appoint a Select Committee to look into all matters including the generation plan. The COPE chairman pointed out that the committee could hold a special meeting to look into this matter.

Attention was also drawn to the decision taken by the Cabinet of Ministers on November 14, 2008 and the payment of various staff allowances to the staff from time to time with the approval of the Board of Directors contrary to the provisions of the Management Services Circular No. 39 of 26th May 2009.

Accordingly, it was revealed that Rs. 2,134.9 million has been provided as these allowances in the year 2021 and Rs. 1,544.4 million in the year 2020. The COPE chairman pointed out that there should be accountability for this money as it is public money.

He also pointed out that the annual expenditure of the Ceylon Electricity Board exceeds the revenue expected by the Inland Revenue Department through all taxes.

Further, the decision taken by the Cabinet in December 2007 to revise the salaries and when the collective agreement was reached in May 2015, it was decided to shift the liability for PAYE and Advanced Personal Income Tax (APIT) to the employees but from 2010 onwards. It was also revealed that the Ceylon Electricity Board had paid Rs. 4.8 billion (PAYE/APIT) in taxes from its fund without deducting the salaries of the employees till 2020. Officials who were present pointed out that the payment of this tax has been stopped by now.

Also, based on the draft collective agreement, the Ceylon Electricity Board had increased the salaries of employees by 25% in the year 2021. However, it was revealed that this was not a legal document as it was an unfinished draft agreement as the relevant parties, employers and unions had not signed the draft. Accordingly, the adverse impact on the Board due to this unauthorized payment was approximately Rs. 9.6 billion, the COPE explained. The COPE chairman pointed out that when looking at this, the institution appears to be non-state-owned.

Further, according to the 2018-2034 long-term power generation plan, the Seethawaka River Hydro Power Project should have been implemented by 2022. Accordingly, discussions were held regarding the suspension of the project at a cost of Rs. 301.19 million at the end of 2020.

The MPs stated that it seems like the feasibility study at a cost of Rs. 301.19 million has been carried out and that the project has been dropped halfway, indicating that it is not up to the appropriate feasibility level. Therefore, it was recommended that a full report be submitted to the COPE.

In addition, a consignment of coal purchased from Taurian Iron & steel Co. Pvt. Ltd (TISCL) through Ceylon Coal Company (LCC) in 2013 could not be unloaded due to the monsoon, and the annual new generation of power generated according to the long-term generation plan was varied. Extraction from power plants and various energy sources was also discussed at length.