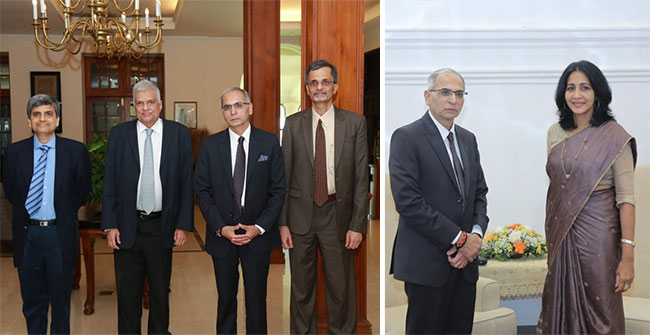 The high-level Indian delegation led by Foreign Secretary Vinay Kwatra, which arrived in Sri Lanka this morning, has left the island a short while ago after concluding their official visit.

The delegation had meetings with President of Sri Lanka Gotabaya Rajapaksa and Prime Minister Ranil Wickremasinghe, during the visit. The talks between the two sides were held in a frank, cordial and constructive manner, the Indian High Commission in Colombo said.

The Indian delegation underscored that the unprecedented recent economic, financial and humanitarian assistance of over US$ 3.5 billion to the people of Sri Lanka was, guided by ‘Neighbourhood First’ policy and Security and Growth for All in the Region (SAGAR) vision of Indian Prime Shri Minister Narendra Modi.

During the call on President Gotabaya Rajapaksa, the Indian side thanked the President of Sri Lanka for his commitment to the development of India-Sri Lanka bilateral relations. Both sides had a productive exchange of views on the current economic situation in Sri Lanka as well as India’s ongoing support.

In the meeting with Prime Minister Ranil Wickremansinghe, the two sides had an in-depth discussion on the Sri Lankan economy and efforts undertaken by the Government of Sri Lanka towards achieving economic recovery.

In this context, both sides highlighted the importance of promoting India-Sri Lanka investment partnership including in the fields of infrastructure, connectivity, renewable energy and deepening economic linkages between the two countries.

The Foreign Secretary of India also had a separate meeting with his Sri Lankan counterpart, Ambassador Aruni Wijewardena. They agreed to work in close coordination towards strengthening diplomatic engagement and undertaking a bilateral visit at an early date.

The Sri Lankan side appreciated the consistent support of the Government and people of India over the past few years in a variety of fields such as counter-terrorism, maritime security, disaster management, humanitarian assistance, development cooperation, commercial engagement and people-to-people ties.

The High Commission said the development assistance extended by India stands at over USD 5 billion with more than USD 600 million being in grants, which include the Sri Lanka Unique Digital Identity Project. India continues to be the largest source of tourism for Sri Lanka.

Sri Lankan side also welcomed the support extended by India during the meetings at the IMF in March this year and on subsequent occasions in different forums including regional and plurilateral organizations. They further acknowledged the initiatives taken by the Indian leadership in encouraging other countries to support Sri Lanka in dealing with the post-COVID normalization of economic activity.