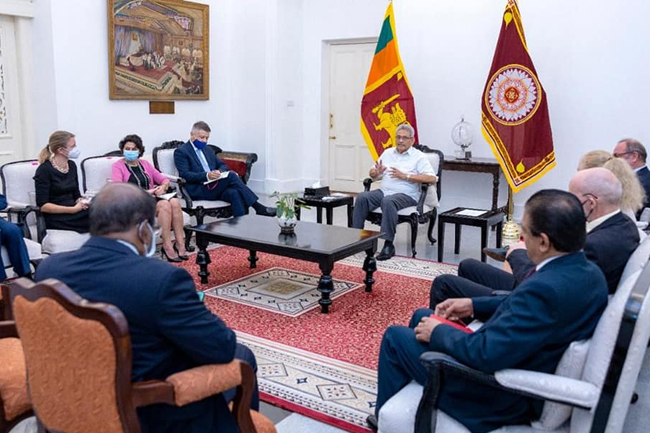 Consider European countries as friends of Sri Lanka, the European Ambassadors remarked during a meeting with President Gotabaya Rajapaksa at the President’s House in Colombo today (June 24).

They also assured the provision of assistance to Sri Lanka at this difficult time.

The delegation members pointed out that a firm message about the future plans of building the country’s economy will certainly pave the way for the international community to assist Sri Lanka.

Nearly 90% of the country’s population lives in rural areas, and 75% of those people depend on agriculture. The President said that by providing them with the required fertilizer and fuel, many problems, as well as the issues related to the supply of food, could be solved.

Steps have been taken to provide uncultivated government lands to those interested in agriculture as a solution to the land issue.

President Rajapaksa explained the initiatives launched by the Government to provide a lasting solution considering the humanitarian situation that has arisen after the war as well as the fair manner maintained in the process of enforcing law without any party affiliation and interfering to the Ambassadors.

A number of areas, including investment, tourism and education, were discussed at length.