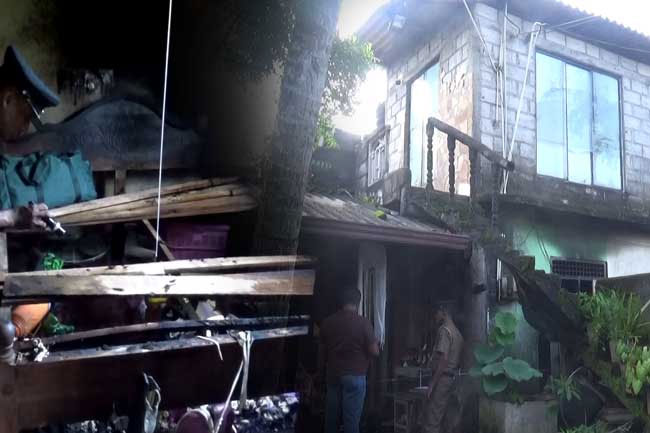 Police suspect that petrol stored in a container had cause of the fire in a house at Kahathuduwa that claimed the lives of a married couple while also injuring their two children.

Police spokesman SSP Nihal Thalduwa said the fire had broken out at a residence located at Magammana in the Kahatuduwa police area last night (26).

The fire which had erupted inside a room of the house had injured four members of the same family including the father, mother and their two daughters who were rushed to hospital.

The 47-year-old father and the 39-year-old mother had succumbed to burn injuries while the 19-year-old eldest daughter is still receiving treatment for critical injuries at the Colombo National Hospital.

The 4-year-old youngest daughter is receiving treatment at the Lady Ridgeway Hospital in Colombo. Their grandmother who had been sleeping in another room was unharmed in the fire, which had later been extinguished by neighbors.

The Government Analyst’s Department and the Acting Magistrate of Kesbewa have conducted inquiries at the location while Mount Lavinia Division SOC officers have also conducted investigations.

The police spokesman said that it has been uncovered that there had been a container with petrol stored in it inside the room and due to the fuel gradually evaporating from the container and stagnating within the room, it is suspected that a small spark or flicker of flame may have caused the fire.

However, it has not been ascertained as of yet whether this is the cause of the fire as further investigations are ongoing, he said.

The police spokesman requested the public to refrain from storing any fuel inside their homes or any other premises as this would pose a threat to their lives, their property as well as neighbors.