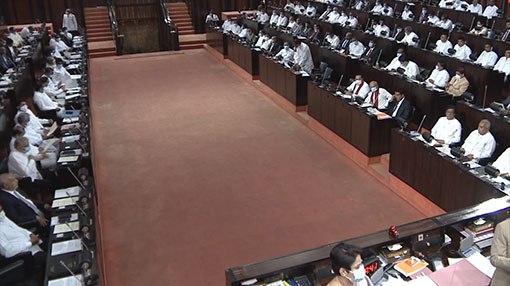 Parliament to convene for three days from today

The Parliament is scheduled to convene at 10.00 a.m. this morning (July 04) as parliamentary sessions are limited to just three days this week.

It was decided at the Committee on Parliamentary Business held last week under the chairmanship of Speaker of Parliament Mahinda Yapa Abeywardana, that parliament would meet on the 4th, 5th and 6th of July this week.

Accordingly, from 10.00 am to 3.30 pm today (04), the entire time is allotted for 50 Questions for Oral Answers that could not be taken up in Parliament previously due to various reasons.

Furthermore, Parliament is scheduled to convene on the 5th of July at 10.00 am.

Accordingly, Regulations under the Foreign Exchange Act, no. 12 of 2017, Two Orders under the Sri Lanka Export Development Act No. 40 of 1979 published under the Gazette Extraordinary No. 2270/20 and 2280/32, Resolution under the Custom ordinance, Resolutions under Section 8 of the Appropriation Act No. 7 of 2020 are scheduled to be approved following debate.

Furthermore, Six Orders under Special Commodity Levy Act, No. 48 of 2007 and Two Regulations under the Imports and Exports Control Act, No. 01 of 1969 published under the Gazette Extraordinary Nos. 2282/21 and 2282/22 are also scheduled to be approved following debate on the same day.

Furthermore, on July 6th from 10.00 am to 10.30 am, time has been allotted to take up Prime Minister’s Questions. It was then decided to debate the Adjournment Motion brough by the Opposition until 4.30 pm on the “prevailing situation in the country”.

Furthermore, due to the existing challenges, attention has been drawn at holding committee meetings online on days when the Parliament is not in session, and thus, it was decided to take necessary further actions.