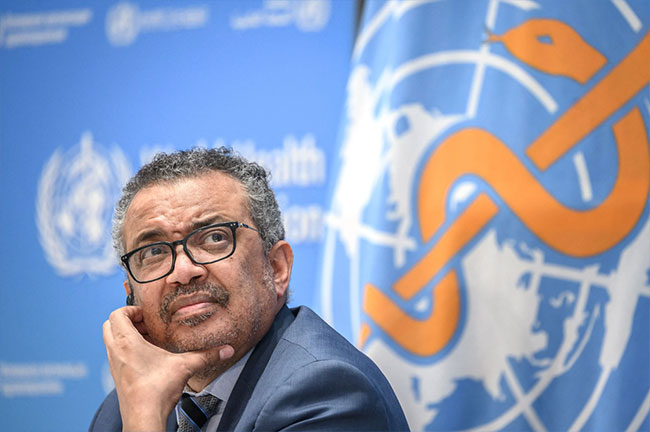 A new sub-variant BA.2.75 of the Omicron variant of COVID-19 has been detected in various countries including India, World Health Organisation Director-General Tedros Adhanom Ghebreyesus said.

Ghebreyesus said that the world body was following the development. “On COVID-19, globally reported cases have increased nearly 30 per cent over the past two weeks. Four out of six of the WHO sub-regions saw cases increase in the last week,” Ghebreyesus said during a press briefing on Wednesday.

“In Europe and America, BA.4 and BA.5 are driving waves. In countries like India a new sub-lineage of BA.2.75 has also been detected, which we’re following,” the WHO chief said

On Wednesday, India reported 16,159 new COVID cases in the last 24 hours, according to the Ministry of Health and Family Welfare.

As per the Health Ministry, 15,394 COVID patients recovered from the disease during the period taking the total number of recoveries since the onset of the pandemic in the country to 4,29,07,327. The rate of recovery currently is 98.53 per cent.

During the briefing yesterday, WHO Chief Scientist Soumya Swaminathan said that there has been an emergence of a sub-variant that is being called the BA.2.75.

“First reported from India and then from about 10 other countries,” she said.

“There are still limited sequences available of the sub-variant to analyse, but this sub-variant seems to have a few mutations on the receptor-binding domain of the spike protein. So obviously, that’s a key part of the virus that attaches itself to the human receptor. So we have to watch that. It’s still too early to know if this sub-variant has properties of additional immune evasion or indeed of being more clinically severe. We don’t know that,” the Chief Scientist said.

“So we have to wait and see,” she said, adding that the world health body is tracking it and its Technical Advisory Group on SARS-CoV-2 Virus Evolution (TAG-VE) is constantly looking at the data from across the world.

WHO Incident Manager COVID-19 Abdi Mahamud said that now is not the time to declare that the pandemic is over.

“We’re still in the midst of the pandemic and the virus has a lot of force left. So whether it is the BA.4 or BA.5 or BA.2.75, the virus will continue. It does what it does good,” he said.

He also added that people and communities must continue to wear masks, avoid crowds and ensure that the most vulnerable and high-risk population is protected. (ANI)