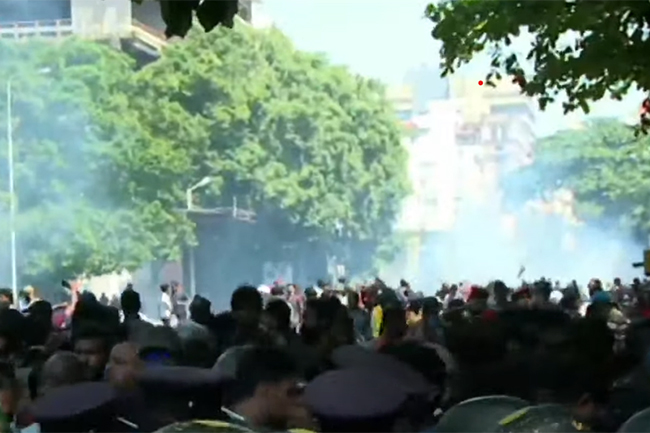 UPDATE: The police have fired a second round of tear gas to disperse the protesters at Chatham Street, Ada Derana correspondent says.

The police have used tear gas and water cannons to disperse the anti-government protesters at Chatham Street and nearby areas in Colombo.

Protest marches are organized today (July 09) all across the country, urging President Gotabaya Rajapaksa and the incumbent government to step down.

Massive crowds thronged the GotaGoGama protest site at Galle Face Green from many parts of the country in support of the mass public protest.

Meanwhile, the Inter-University Students’ Federation (IUSF) arrived at Galle Face Green in a protest march which kicked off near the University of Kelaniya yesterday.

Reportedly, political parties, trade unions, civil organizations and many other groups have pledged support for this mass demonstration.

Ahead of the mass public protests, the government imposed a police curfew from 9.00 p.m. last night (July 08) in parts of the Western Province, however, the move came under fire for being undemocratic and a violation of the fundamental rights of the people of the country.

Later, the police curfew order, which was initially declared to be effective until further notice, was lifted at 8.00 a.m. this morning.