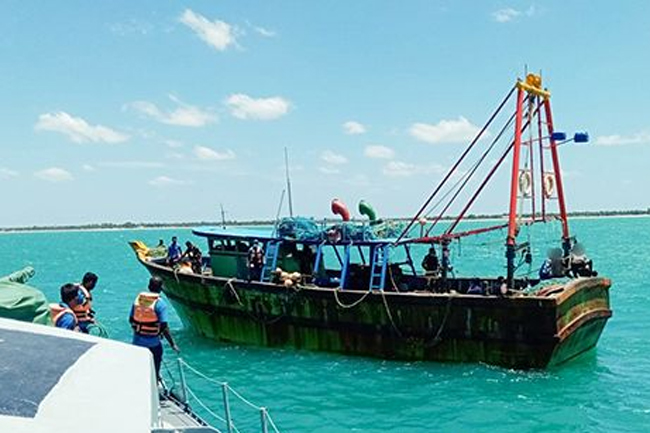 The operation led to the seizure of an Indian trawler with 09 Indian fishermen, while poaching in Sri Lanka’s waters off Mullaitivu, via the International Maritime Boundary Line (IMBL).

Accordingly, the navy had deployed a Fast Attack Craft of the 4th Fast Attack Flotilla (4 FAF), attached to the Eastern Naval Command to chase away Indian trawlers poaching in Sri Lanka’s waters, via the IMBL on August 10.

In this operation, the Navy seized the Indian poaching trawler with 09 Indian fishermen and their fishing gear.

The Indian trawler and the 09 Indian fishermen held by the Navy are being brought to the Trincomalee harbour as of now and they are to be handed over to the Fisheries Inspector of Trincomalee for onward legal action.

Meanwhile, the Navy is determined to carry out regular operations to protect the country’s fishery resources and livelihood of the local fishing community.