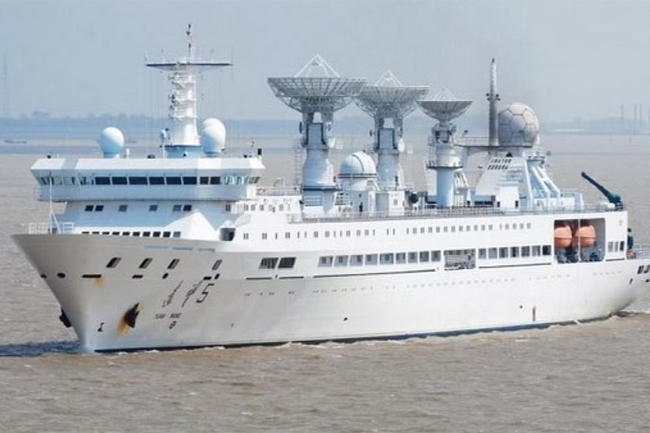 The U.S. and Indian officials have strongly pressured the Sri Lankan government to revoke the planned visit of the Chinese satellite-tracking vessel Yuan Wang 5, which set sail from China to Sri Lanka’s strategic Hambantota Port.

The Washington Post said the Chinese research vessel has been “the source of rising tensions and a symbol of the mounting geopolitical tug-of-war between India and the United States and China over Sri Lanka at a time when the economically devastated island nation is caught between major financial supporters.”

The 730-foot-long ship was scheduled to dock at the Hambantota Port between August 11 and 17, however, Sri Lanka made a request from Beijing to defer the arrival.

The request for deferment came after India voiced strong concerns on the matter and said it carefully monitors any developments having a bearing on its security and economic interests, and takes all necessary to safeguard them.

China, in response to India’s concerns, said it hoped “relevant parties” would refrain from interfering with its legitimate maritime activities and stressed that it was “senseless to pressure” Colombo by citing the issue of security concerns.

Amidst growing diplomatic tensions, Sri Lanka clarified that permission and clearance were given to the Chinese vessel for “replenishment”. The vessel will conduct satellite control and research tracking in the north-western part of the Indian Ocean region through August and September, the Sri Lankan government said further.

The Washington Post said, while a Chinese navy ship arriving at Hambantota is not strategically significant, Indian and U.S officials argue that it would be viewed as Sri Lanka giving special treatment to China, a major creditor of the island nation.

The news agency noted that the planned visit of the Chinese vessel comes at a time when the embattled Sri Lankan government needs to renegotiate its debt with a host of international lenders and obtain a bailout from the International Monetary Fund.

“The dispute reflects the jockeying between the United States and its partners and China that is taking place across the world. Since taking office, President Biden has ramped up previous U.S. administrations’ efforts to curtail Chinese expansion into the Indian and Pacific oceans and has rallied countries such as India and Australia to help in that effort. For its part, India has sought American help to counter China, a regional rival with which it has ongoing border disputes,” the news agency further pointed out.

As of Thursday (Aug 11), the day Chinese research vessel was originally scheduled to dock in Colombo, it was reported that although the ship has slowed down and turned around following the request for deferment, it was still heading towards the island.

Amidst the row over the Chinese research vessel, Sri Lanka allowed a Pakistani warship PNS Taimur to make a port call in Colombo today. According to Sri Lanka Navy, this Pakistani-guided missile frigate built by Hudong-Zhonghua shipyard in Shanghai, is in Colombo for a formal visit.

The warship made a stop in Colombo during its maiden voyage to Pakistan while exercising en route with Cambodian and Malaysian navies.