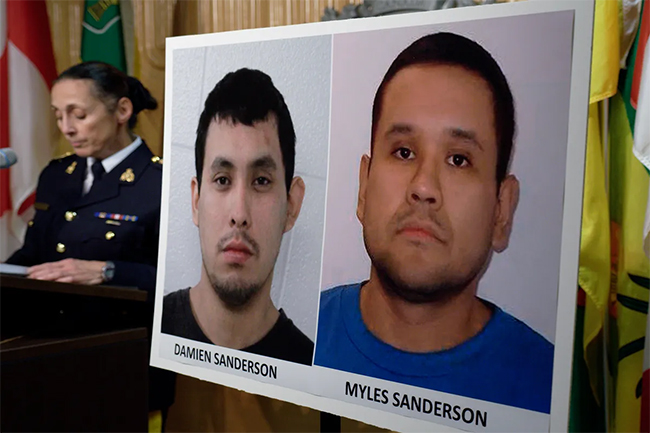 The suspect in a stabbing that left 10 dead and 18 others injured has died of self-inflicted wounds as he was captured by police, report local media.

Police said earlier that Myles Sanderson, 32, was taken into custody in the province of Saskatchewan on Wednesday afternoon.

Footage from the scene showed a white SUV run off the road and surrounded by police cruisers near Rosthern town.

Ten victims remain in hospital, three of them in a critical condition.

News of his capture came soon after an alert was sent to Canadian mobile phone users warning people near the town of Wakaw to seek immediate shelter/shelter in place because a man armed with a knife had been seen driving in the area. Rosthern is 44km (27 miles) west of Wakaw.

An unnamed official told the Associated Press that during a car chase, officers knocked Sandersons vehicle off the road.

The source did not tell the news agency when or how the fugitives injuries were inflicted, or when he died.

Unverified videos on social media showed a suspect being arrested by police on the side of a rural highway. The vehicle in the footage bears a resemblance to a white Chevrolet Avalanche, the same model that police described in their since-cancelled alert.

The main suspects brother, Damien Sanderson, was also accused of playing a role in the attacks on Sunday in the remote area. On Monday, police found his body and are now investigating whether his brother killed him during the manhunt.

On Wednesday, the parents of the brothers appealed for their surviving son to turn himself in.

I want to apologise for my son, my sons, his mother said in an interview with CBC News.

We dont know the whole story, but I want to apologise to everybody that was hurt and affected by this terrible situation.

Police have not yet revealed any suspected motive for the crime spree, which encompassed 13 separate crime scenes.

Saskatchewan Premier Scott Moe thanked police who have worked day and night to track down and arrest this dangerous criminal, adding: We owe you all a great debt of gratitude.

Canadas parole board said on Tuesday that it would review why Myles Sanderson was released early from prison while serving a four-year sentence for several violent crimes.

In February, the board said he would not present an undue risk and that his release would contribute to the protection of society by facilitating his rehabilitation.

Saskatoon police earlier confirmed they had been searching for Myles Sanderson since May, when he stopped meeting his assigned caseworker and was classified as unlawfully at large.

Parole documents show Myles Sanderson has a decades-long criminal record, including 59 criminal convictions since he was 18, including assault, threats and robbery.

At an emotional news conference on Wednesday, relatives of the victims spoke of their horror over the attack.

We are broken, but were not defeated, said Mark Arcand, chief of the Saskatoon Tribal Council and brother of Bonnie Goodvoice-Burns. Bonnie, 48, and her son Gregory Burns, 28, were both killed.

Bonnie took care of everybody and was a true matriarch, her brother said, adding that Gregory loved his family and had two children with a third on the way.

Chief Arcand recalled his shock after hearing news of the attack, driving for two hours to reach his sister and her family at James Smith Cree Nation, only to find them among nine fatalities who lived in the community.

One of the most traumatising things was the visual scene that day, he said.

Bonnie was a hero, he said, adding that she died protecting her three young sons. One of the children was stabbed but survived.

These two young boys woke up to screaming not being able to help, he said. One of the young boys was hiding behind a high chair watching the whole thing happen.

Following the arrest, the Saskatchewan Federation of Sovereign Indigenous Nations posted on Twitter that the group is grateful he was apprehended & no more lives were lost.

We keep the people of James Smith & those affected in our thoughts & prayers.