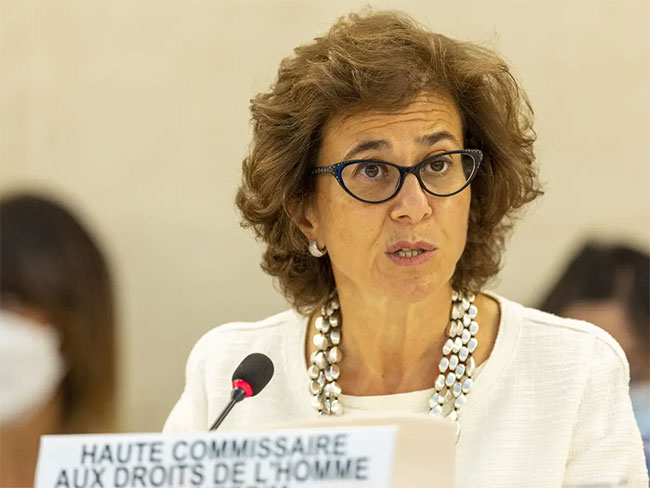 The United Nations acting high commissioner for human rights, Nada Al-Nashif on Monday urged the Government of Sri Lanka not to revert to its reliance on draconian security laws, but takes positive action to foster an environment for peaceful protest, critical discussion and debate.

Presenting a UN Human Rights Office report on Sri Lanka, the acting High Commissioner for Human Rights told the 51st session of the Human Rights Council in Geneva that the situation in Sri Lanka was fragile and called for accountability for human rights violations.

She stated that in a powerful expression of the indivisibility of rights, the country witnessed remarkable and unprecedented mass protests demanding change to Sri Lanka’s political landscape.

People from different socioeconomic, cultural, ethnic, and religious backgrounds came together to call for deep political and democratic reforms, as well as accountability for economic mismanagement and corruption, she said, adding that months of countrywide protests eventually led to the President’s resignation on 14 July and a new President was elected by the Sri Lankan Parliament on 20 July.

“Sri Lanka has navigated these changes in a largely peaceful way and in accordance with its Constitution, but the political and economic situation remains fragile and the potential for further instability remains,” Nada Al- Nashif told the 51st session of the Human Rights Council.

She stated that the broad-based demands by Sri Lankans from all communities, in particular youth, for accountability and democratic reforms present an important starting point for a new and common vision for the future of Sri Lanka.

“I encourage the new Government to embark on a national dialogue to advance human rights and reconciliation and to carry out the deeper institutional, democratic and security sector reforms needed to restore the independence of key institutions, to combat impunity, to prevent the recurrence of human rights violations, and to tackle the economic crisis.”

In doing so, it is essential the Government ensures an environment that respects and promotes free expression, peaceful assembly and inclusive democratic participation, she said.

The acting high commissioner said that of concern in recent weeks, scores of leaders and members of the protest movement and trade unions have been arrested. She said particularly troubling was the use of the Prevention of Terrorism Act to arrest three student leaders on 18 August 2022, despite the Government’s announcement in June 2022 that it has been applying a de facto moratorium on the use of this Act since March of this year.

“I urge the Government not to revert to this reliance on draconian security laws, but takes positive action to foster an environment for peaceful protest, critical discussion and debate,” she said.

The acting high commission said that Government has a fresh opportunity to steer the country on the path towards justice and reconciliation and to address the legacy of conflict.

She welcomed in this regard the tone set by the President in his first speech to Parliament in which he recognised the diversity of the Sri Lankan nation and promised constitutional reforms. “Also, I was pleased to discuss with the Government potential areas of cooperation, including the drafting of a new counter-terrorism law to replace the PTA and in the area of transitional justice and the strengthening of institutions.”

Successfully delivering on these promises also requires a break from the past, Al-Nashif said. This involves security sector reforms to remove military officials or former paramilitary leaders implicated in past human rights violations, to increase transparency and to ensure accountability, she said.

The acting high commission further said that continued reports of surveillance and intimidation of civil society organisations, victim groups, human rights defenders, journalists and former cadres of the LTTE by police, military and intelligence services are of concern. “Without fundamental security-sector reforms and de-militarization of the North and the East, this pervasive culture of surveillance and oppression will not end.”

She stated that thirteen years since the end of war, tens of thousands of survivors and their families continue to seek justice and to know the truth about the fate of their loved ones.

“They remain in need of reparations. The Sri Lankan State has repeatedly failed to pursue an effective transitional justice process and uphold victims’ rights to truth, justice and reparations.”

“Rather, as described in our previous reports, successive governments have created political obstacles to accountability, actively promoted and incorporated some military and former paramilitary officials credibly implicated in alleged war crimes into the highest levels of government, and have failed to present a shared understanding of the conflict and its root causes.”

Similarly, despite some suspects being charged, there has been no further progress to establish the truth about the terrible Easter Sunday bombings of 2019, she said.

The OHCHR called for an independent and transparent investigation, with international assistance should it be necessary, to pursue further lines of inquiry, in particular the role of the security establishment, in a process that guarantees the full participation of victims and their representatives.

The acting high commissioner said it is the hope of her office that the Government will now seize the opportunity offered by the changed circumstances in the country to re-embark on these fundamental processes that promote national reconciliation by ensuring accountability for past human rights violations and abuses.

In the absence of current and effective accountability options in Sri Lanka, the High Commissioner has called on States to pursue alternate strategies to advance the accountability at the international level, including through consideration of targeted sanctions against alleged perpetrators as well as cooperation to initiate prosecutions on the basis of extraterritorial and universal jurisdiction, she said.

The acting high commissioner stated that the team established in her office to advance accountability pursuant to Resolution 46/1, paragraph 6, has made important progress.

“It has conducted proactive investigative and analytical work, including in relation to gender and child-related violations, and is consolidating information and evidence collected by the United Nations and other bodies and entities into a repository, which will assist future accountability initiatives.”

She said the OHCHR will continue to place victims at the heart of this work. “This includes seeking to minimise security risks faced by those who speak out about past violations.”

As the High Commissioner noted to the 49th session of the Council, the scale and type of this accountability work requires adequate time, financial resources and support by States, she said and therefore urged the Council to ensure that this important work is appropriately reinforced.

“Impunity remains a central obstacle to the rule of law, reconciliation and Sri Lanka’s sustainable peace and development. This impunity continues to embolden those committing human rights violations, has created fertile ground for corruption and the abuse of power, as well as contributing to the present economic crisis,” she emphasized.

The acting high commission further added that the mandate granted by the Council under resolution 46/1 – to continue monitoring the human rights situation and pursue accountability for crimes under international law – is now more important than ever, and responds to the broad-based aspirations for change being expressed by Sri Lankans from all communities.