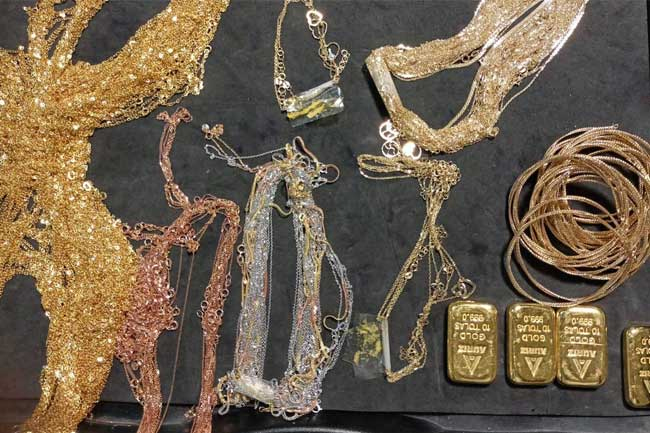 Four arrested at BIA with gold worth over Rs. 170 million

Four passengers have been arrested at the Bandaranaike International Airport (BIA) on suspicion of trying to smuggle in a stock of gold into the country this morning (Sep 30).

The contraband, weighing 08 kilograms and 500 grams and worth around Rs. 170 million, was seized by the officials of the Narcotics Control Unit of Sri Lanka Customs.

The arrested suspects had arrived at the BIA on a flight belonging to Oman Air from Muscat City in Oman at around 7.40 this morning.

A 25-year-old couple residing in the Kollupitiya area and a man aged 50, who were among the four arrestees had covertly tried to bring the gold consignment hidden in their luggage trolley.

In addition, a 35-year-old male, who is a resident of the Mattakkuliya area of Colombo, had smuggled in a stock of gold jewellery and four gold biscuits hidden inside his body.

All four suspects had tried to leave the airport premises through the “Green Channel” of the airport, the channel for passengers who do not have any items to declare.

These smugglers have been discovered when the officials of the Narcotics Control Unit of Sri Lanka Customs searched them, after observing their suspicious behaviour.