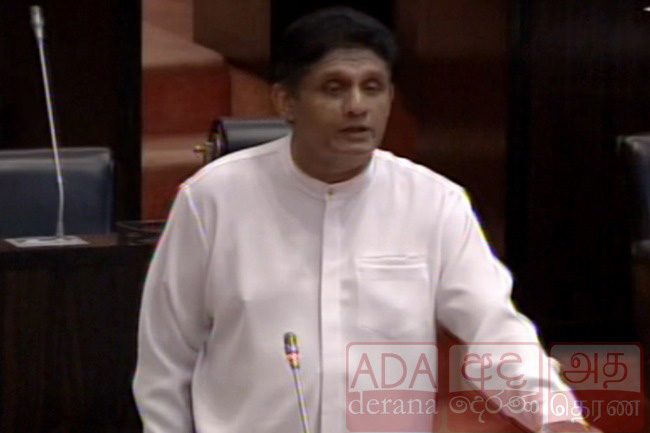 Leader of the Opposition, Sajith Premadasa today requested the government to arrange for the release of Inter-University Students’ Federation (IUSF) convenor Wasantha Mudalige and the two others who are detained under the Prevention of Terrorism Act (PTA).

Making a special statement regarding the matter in the parliament today (Oct 05), he stressed the need to conduct a normal investigation if there are any charges against them.

MP Premadasa further claimed that activists Wasantha Mudalige, Ven. Galgama Siridhamma Thero and Hashantha Gunathilaka have been detained in Tangalle under detention orders, under the Prevention of Terrorism Act for more than 48 days now.

“What did they do wrong? We heard that Wasantha Mudalige has been taken to Malwana, Kalawana and Navagamuwa areas at night. We don’t know what they are doing. Why can’t they do all these in the daytime?”

“These people have been arrested for anti-state crimes. What does anti-state mean? Don’t the people of this country have the freedom to protest, speak and hold meetings?”

“In the end, an incident will happen or they will cause an incident and say that Wasantha Mudalige was shot dead when he tried to escape,” the opposition leader charged.

Speaking further, the SJB leader also expressed that they do not condone violence at all, questioning whether there is no space in this country to have a peaceful protest.

Sajith Premadasa, who claimed that the detention orders have been issued with effect for 90 days, further stressed that this is a terrible situation as there is no charge sheet against the detained persons yet.