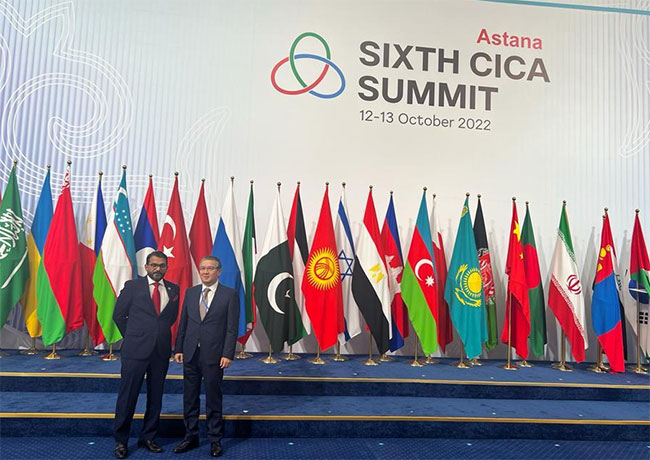 During the meeting with the Deputy Minister of Foreign Affairs of Kazakhstan Adil Tursunov, State Minister Balasuriya extended congratulations to Kazakhstan on successfully hosting the Sixth CICA Summit and noted that holding bilateral consultations focusing on strengthening  economic, culture and political relations between the two countries would be timely, observing that the last consultations were held over a decade ago.

State Minister Balasuriya also requested Kazakhstan to explore avenues for cooperation in the power and energy sectors in Sri Lanka. Appreciating the participation of the State Minister of Foreign Affairs at the Sixth CICA Summit, the Deputy Minister of Foreign Affairs assured that Kazakhstan was ready to support Sri Lanka and suggested that a team visit Kazakhstan to explore options available in the energy sector.

Deputy Foreign Minister Tursunov also stated that as a precursor, virtual bilateral consultations on economic, culture and political relations could be held and invited State Minister Balasuriya to visit Kazakhstan in 2023.

During the meeting with the Minister of the Foreign Affairs of the Republic of Azerbaijan Jeyhun Bayramov, State Minister Balasuriya briefed him on the current situation in Sri Lanka. The discussions also focused on expanding ties in the area of power and energy.

As Azerbaijan is an oil producing nation, State Minister Balasuriya drew attention to Sri Lanka’s efforts to liberalize the petroleum sector and noted that Cabinet approval was recently granted to open fuel Imports and retail sales market to companies from oil producing nations.  The two sides agreed to continue discussions on further cooperation and to establish a bilateral consultations mechanism in order to expand existing ties.

On 12 October, 2022, State Minister of Foreign Affairs Tharaka Balasuriya held discussions with the Honorary Consul for Sri Lanka in Kazakhstan, Yerzhan A. Akatayev on new avenues for the expansion of trade and investment between Sri Lanka and Kazakhstan.

State Minister Balasuriya was joined during the meetings by the Acting Additional Secretary to the State Minister and Public Diplomacy Sithara Khan, the Ministry of Foreign Affairs said.