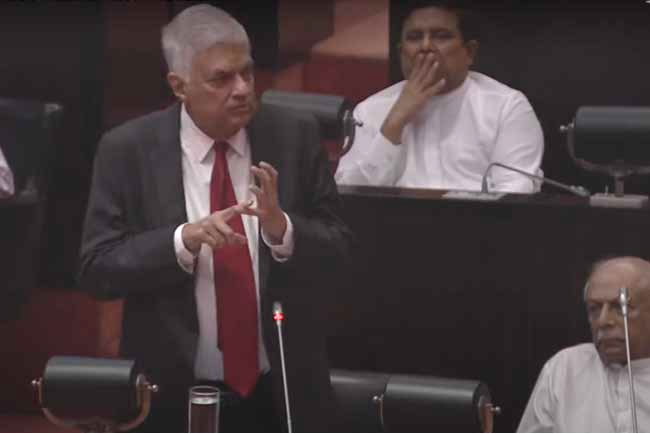 President says he will not allow another Aragalaya to topple govt

President Ranil Wickremesinghe says that he will not allow another ‘Aragalaya’ protest movement to be created in the country to attempt to overthrow the government.

Addressing the Parliament today, during the third reading debate on the 2023 Budget, the President said that he will deploy the military and impose emergency laws if the need arises to deal with such a situation.

“What happened on May 09 and July 04? Some of our temples were threatened and burned. The Maha Sangha of the Malwatu and Asgiri temples were threatened and warned not to speak. Our Sangha was afraid and did not speak. Then how can Article 09 of the Constitution be protected? We are bound by the Constitution to protect Buddhism. Who was behind these? Our young monks were used for this. They went and asked the Mahanayake Theros to step down and hand over leadership to them.”

“Hindu priests were also threatened. The same goes for Muslims. The Catholic Bishops also said that they are against violence. Then who were the religious leaders that were with these people? We do not want to lead this country to Dinh Diem rule.”

“I will not allow any Dinh Diem or those around him. Now they say they are going to start the struggle again,” he said.

Wickremesinghe said the SJB, JVP and TNA are holding their public meetings and gatherings without any hindrances and that as long as they obtain permission from the police any amount of protest can be held on the streets.

“Anyone can hold meetings, the JVP had meetings. The TNA is holding meetings in the North.
Anyone can hold protests or meetings legitimately. You can shout as much as you want and call me a dictator. I don’t mind. However, I must say one thing. Get your permit to protest before you take to the streets. Don’t obstruct vehicular movement and get onto a side of the road and protest. That’s all I am asking.”

“Yet, if anyone thinks that they can engage in another struggle without obtaining a license, stop it. I have instructed the police. If anyone tries to stage a protest to topple the government, I will not allow it. I will impose emergency law and deploy the military. There is no room for Dinh Diems in this country.”

“I intend to appoint a commission to investigate this incident,” the President said.