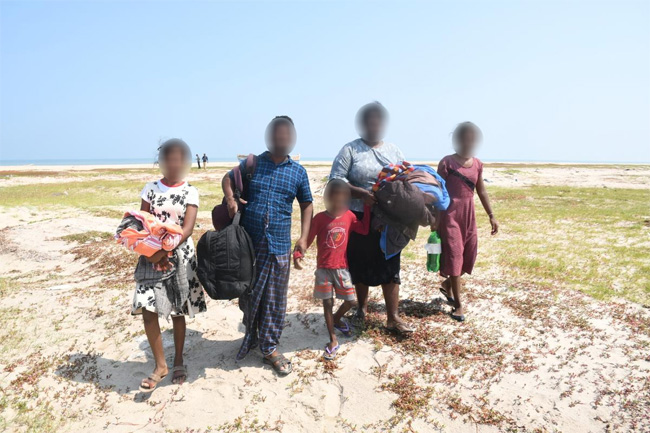 Five people belonging to a family from Killinochi district, Sri Lanka, reached the Indian waters at Dhanuskodi first islet at around 5 a.m. on Thursday.

With this, the total number of refugees camping at the Special Camp in Mandapam stands at 214. Apart from them, an aged woman, from Sri Lanka had died in a hospital in Madurai due to age-related ailment.

The Marine Police at Mandapam, on receipt of a call from local fishermen, brought the five refugees to the shore at around 8 a.m.

Investigations revealed that S. Ganeshamoorthy (34) of Killinochi district was working as a casual worker in Sri Lanka.

Following the economic crisis, he had lost his job. Surviving with his dependent family in the island nation proved a big challenge. Hence, he borrowed LKR 200,000 from his friends and relatives.

After fixing up an agent at Mannar district on Wednesday, he, along with his wife Rajinthi (29) and children Kajana (13), Dayana (11) and Sajishan (11) sailed in a fibre vessel and got dropped at a location near Dhanuskodi islet in the early hours.

With just a set of clothes and some bread and drinking water, the family told reporters at Mandapam that joblessness was at its peak.

“I am a mason. Almost for two months, I had no work. People stopped lending money to us since repayment was uncertain. Life was miserable as we neither had an assured job, nor had money to ear,” he narrated.

“A close relative of mine stood guarantee for the money I have borrowed,” Mr Ganeshamoorthy said and hoped to get back to his home soon when things improved in the island nation.

After due verification of their identities, the Marine Police officers sent them to the Rehabilitation Centre at Mandapam.

The officers at the Centre said that the Tamil Nadu government has provided shelter and food for the refugees.

“With the arrival of the five people, 214 refugees are registered in the Centre,” they added.