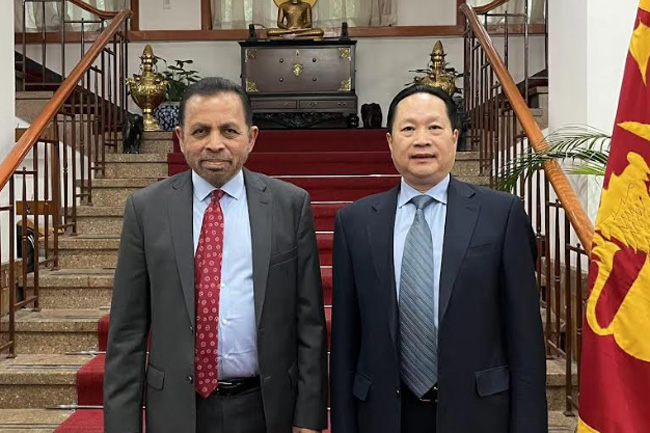 The Sri Lanka Embassy in Beijing says that it is actively exploring the possibility of Chinese cruise ships and yachts visiting Sri Lanka with a view to attracting more Chinese tourists to the island nation.

Sri Lankan Ambassador, Dr. Palitha Kohona has had a very successful virtual meeting with the Vice President of the China Cruise and Yacht Industry Association (CCYIA), Zheng Weihang, on 23 November 2022.

Vice President Zheng said that Sri Lanka will be promoted as a new market for Chinese cruise ships.

On 15 November, he had attended a conference of Chinese cruise ship operators, where he formally proposed that Sri Lanka be designated as a destination for cruise ships after the travel restrictions are relaxed.

He had proposed creating four/five Sri Lankan cruise itineraries. Ships will dock at Sri Lanka’s ports for a day and give the passengers the option of taking tours in the region close to the port thus engaging land operators as well. He specified that the CCYIA will work with the Embassy to promote Sri Lanka at cruise-related conferences.

Sri Lankan Ambassador responded that the Embassy will also assist with these goals actively.

Sri Lanka has three well-established ports for cruise ships: Colombo, Galle, and Trincomalee. Dr. Kohona stated that there were many cruise visitors from Europe before the pandemic, and recently welcomed the Cruise ship VIKING MARS with 900 tourists on board.

He highlighted that other European cruise ships are scheduled to call at Sri Lanka ports in the coming weeks. The Ambassador suggested that tourists could experience not only the coastal cities but also the Buddhist sites of the island, like the Temple of the sacred Tooth Relic in Kandy, or the lush green forests, home to the biggest concentrations of wild elephants and leopards in Asia.

Ambassador Dr. Kohona said that the Embassy successfully participated in the last CIIE, with two National Pavilions (Food and Beverages, Gem and Jewelry).

He opined that collaboration with CCYIA will benefit both Sri Lanka and the cruise industry. The Ambassador extended an invitation to Vice President Zheng and the team of CCYIA to participate in the upcoming Sri Lanka Tourism Promotion Event which is to take place in mid-December at the Embassy.