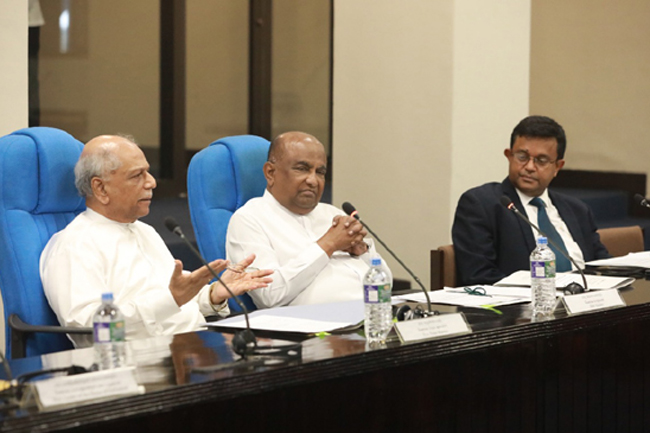 The National Council has discussed at length the establishment of a special statutory body to oversee the implementation of its proposals and recommendations.

MPs Namal Rajapaksa and Patali Champika Ranawaka pointed out that the proposals and recommendations brought by the National Council should not be limited to a document and that they should be implemented and followed up accordingly.

Prime Minister Dinesh Gunawardena agreeing with the said proposal made, stated that he will look into the possibility of establishing the said institution soon.

This was discussed at the National Council which met in Parliament on November 24 under the chairmanship of Speaker Mahinda Yapa Abeywardena and the participation of PM Gunawardena.

The National Council sub-committee on identifying short and medium-term programs related to National Policy chairman MP Namal Rajapaksa presented the suggestions made regarding obtaining the support of the university vice-chancellors and university lecturers for formulating national policies and regarding the progress of discussions with them.

PM Gunawardena specifically mentioned that the fuel and energy crisis is a huge challenge to be faced in the coming years.

Hence, he pointed out that a necessary policy should be prepared to deal with it by paying attention to it. The Prime Minister further stated that the National Council should pay attention to the said.

Additionally, the Speaker Hon. Mahinda Yapa Abeywardena emphasized on the importance of preparing a policy for the provincial councils and the central government to work together. He also pointed out that this need will be felt more after a provincial council election in the future.