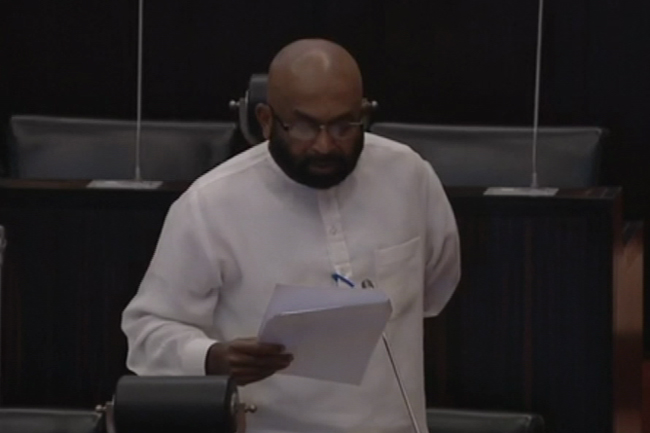 Six containers of powdered milk stocks stuck at the Colombo Port had been imported in violation of import-export regulations, State Minister of Finance Ranjith Siyambalapitiya says.

Milk powder importers recently alleged that 400,000kg of milk powder stocks are stuck at the Colombo Port are nearing the date of expiry as they were not released by the Customs on time.

After the allegations came to light, State Minister Siyambalapitiya instructed the authorities to probe the matter and submit a detailed report on their findings.

Presenting the said report to the parliament this morning, the lawmaker stated that the importers have brought in the powdered milk consignment in question without complying with the import-export regulations.

As per the documents submitted to the Controller-General of Import & Exports, these milk powder stocks had not been imported for direct consumption, but to be used for chocolate and milk tea production, under the recommendations of the Industry Ministry’s secretary, Siyambalapitiya said further.

He said that on November 14, Sri Lanka Customs initiated an investigation into the company that imported the disputed milk powder stock based on suspicions regarding the payment made under an Open Account transaction.

Accordingly, the containers in question were intercepted by the Customs 25 days after they reached the Colombo Port, the state minister continued, adding that Customs officers would be taking further legal action against these milk powder containers.

Siyambalapitiya stressed that a shortage of milk powder is not expected in the market as importing the product is not restricted.

If the importer in question follows the proper procedure and fulfills the necessary legal requirements, the Customs investigation will be concluded in a week and the milk powder consignment will either be released or discarded properly.