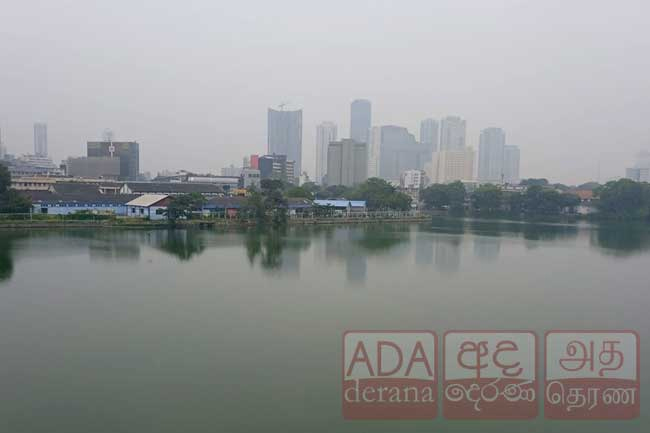 The National Building Research Organization (NBRO) has warned that the quality of air in parts of the island has dropped further to an unhealthy level.

The foggy or misty conditions observed these days in several parts across the island are a result of air quality dropping to very unhealthy levels due to the increase in dust particles in the atmosphere, according to the NBRO.

The NBRO says that an influx of dust particles contaminating Sri Lanka’s air space through strong winds from India is a major cause for this issue.

According to the US Air Quality Index (AQI), the air quality was at 249 in Colombo on Thursday (Dec. 08).

The AQI index was 291 in Kurunegala, 280 in Jaffna, 251 in Vavuniya, and 214 in Kandy. Puttalam and Hambantota have also been alerted after it was observed that the air quality is being affected further.

In many areas of the country, the air quality was recorded at a level between 150 – 200, which is termed to be unhealthy, according to the NBRO.

Meanwhile, earlier on Sunday, the Commission for Air Quality Management (CAQM) of India, a Union Government panel recommending steps to control air pollution in its national capital, New Delhi, announced a temporary ban on construction and demolition activities in Delhi, the NDTV reported.

The announcement came after the air quality in Delhi and the national capital region breached the ‘severe’ category, according to the Indian Media reports.

The air quality in the national capital region was recorded as "very poor" on Wednesday morning. The overall Air Quality Index (AQI) of Delhi stood at 323 at 8 a.m., better than 354 at 4 p.m. on Tuesday, the foreign media mentioned.

However, if the air quality drops further from the unhealthy or red range (151-200), the AQI recommends that people with compromised health to avoid prolonged outdoor work or activity.

It is much healthy to wear face masks when outdoors and stay indoors as much as possible to protect yourself from the unhealthy drop in air quality, for everyone else.

Meanwhile, Secretary to the Environment Ministry Anil Jasinghe has advised children, elders and those who are suffering from respiratory ailments and allergies against outdoor activities due to the low air quality in the country. They are urged to wear face masks if they are engaged in outdoor activities.