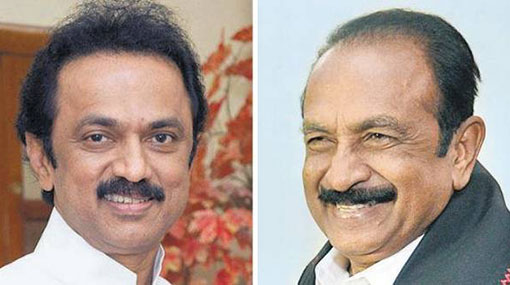 DMK president M K Stalin has opposed the alleged deployment of additional armed forces in the Tamil areas of Sri Lanka and requested Indian Prime Minister Narendra Modi to take up the issue with the island nation’s newly elected President.

“After swearing-in as the new president of Sri Lanka, Gotabaya has passed orders to increase armed forces in Tamil areas of the island nation. Rajapaksa brothers have also started to change the Tamil names of streets in Northern and Eastern Province. DMK condemns this strongly,” Stalin said in a statement.

Stalin said dignity and self-respect for Sri Lankan Tamils was important and PM Modi should consider this issue “seriously”.

“Rights provided by the island nation’s constitution to the Sri Lankan Tamils and a solution, which the Tamils expect, should also be fulfilled,” Stalin said.

He said Gotabaya Rajapaksa should keep his “promise” to treat all citizens equally and the Indian prime minister was in a position to persuade him.

“Modi should speak to Gotabaya to resolve the Sri Lankan Tamil’s issue properly. The Indian PM is in a position to put out the fire which burns against Tamils in the heart of Gotabaya. So, I hope PM would insist Gotabaya that Tamil people’s interest are looked after,” the DMK leader added.

Rajya Sabha MP Vaiko, whose party Marumalarchi Dravida Munnetra Kazhagam (MDMK) is in alliance with the DMK, has announced a protest at New Delhi’s Jantar Mantar against Rajapaksa’s visit to India on November 28.

Another DMK ally, Viduthalai Chiruthaigal Katchi (VCK- a Dalit party) has requested the Indian government to not allow President Gotabaya to visit the country. -Agencies