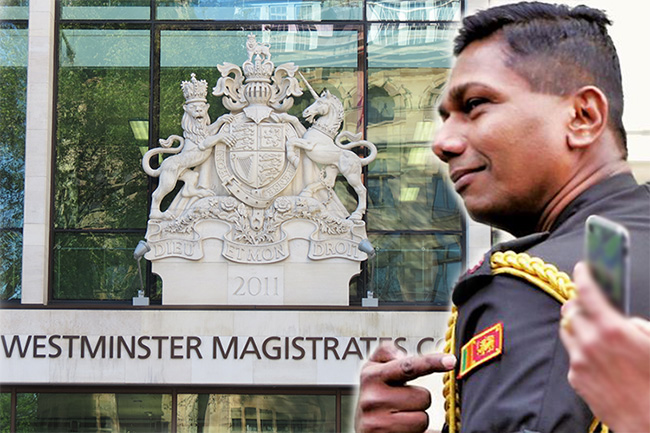 Westminster Magistrate’s Court in London today (06) imposed a fine of Sterling Pounds (GBP) 2,400 on former Defence Attaché at Sri Lanka High Commission in London Brigadier Priyanka Fernando who was charged for making a threatening gesture towards a group of L.T.T.E. supporters back in 2018.

The hearing of the case was taken up before Senior District Judge (Chief Magistrate) Emma Arbuthnot, who found Brigadier Fernando guilty of violating Section 4(A) of the Public Order Act.

The chief magistrate, delivering her ruling said: “I have no doubt he intended to cause at the alarm. They were purposeful gestures, made as the Brigadier was staring at these protesters. The Brigadier was a senior officer in uniform wearing medals. Unlike the other senior officer there, his body language appeared to be arrogant and intimidating. There were three gestures and not just one. In the context of the relationship between Sri Lanka and Tamil Elam protesters he must have known that it would have been alarming at the very least to the protesters who saw him do this.”

The court upheld a previous ruling that the defendant is not protected by diplomatic immunity. “I see no reason to re-visit that ruling,” the chief magistrate said. She went on to say: “I find that a valid information was laid on 6th February 2018 and valid summonses were issued by this court on 22nd February and 9th August 2018. The information was laid within the period of six months.”

However, the government of Sri Lanka had previously reiterated that it maintains that Brigadier Priyanka Fernando as a diplomat, who was attached to the Sri Lanka High Commission in London, is entitled to diplomatic immunity as per the Vienna Convention on Diplomatic Relations of 1961.

On October 18, a fresh trial was commenced against Brigadier Priyank Fernando, charged for making repeated cut-throat gestures towards a group of L.T.T.E. supporters who had been conducting a protest in front of the Sri Lanka High Commission in London on the 4th of February 2018.

A three-member British judge bench, headed by the Chief Magistrate Ms Sonia Henley, who found Brigadier Fernando guilty of causing harassment, alarm and distress to Tamil protesters with his gestures, had issued an Arrest Warrant on him at a previous trial.

The warrant was later withdrawn following the intervention of the Foreign Ministry of Sri Lanka.