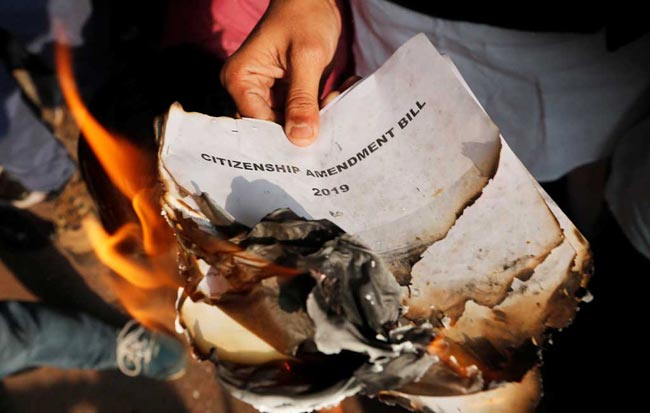 The Citizenship Amendment Bill (CAB) passed the upper house of parliament by 125 votes to 105. It had already cleared the lower house.

The parliamentary approval came amid growing protests against the bill in several north-eastern states.

Critics say it is discriminatory.

But the ruling Hindu nationalist Bharatiya Janata Party (BJP) says the bill will give sanctuary to people fleeing religious persecution.

The legislation is now set to be signed into law.

Those protesting against the bill say it is part of the BJP’s agenda to marginalise Muslims and violates India’s secular principles.

“Muslims are already being persecuted. This will make them more vulnerable,” a participant at a protest against the bill in Delhi told the BBC.

More than 700 eminent Indian personalities, including jurists, lawyers, academics and actors, have signed a statement “categorically” condemning the bill.

It says that the government seems “intent on causing huge upheavals within Indian society”.

Many others have questioned why it only refers to non-Muslim migrants from Pakistan, Bangladesh and Afghanistan, when minorities from other neighbouring countries were also being persecuted.
Tamil film superstar-turned-politician Kamal Haasan asked why the same courtesy was not being extended to Sri Lankan migrants from minority communities.

In parliament as well, a number of opposition parties and politicians have raised similar concerns.

Prominent Muslim MP Asaddudin Owaisi said it was “worse than Hitler’s laws and a conspiracy to make Muslims stateless”.

The leader of the main opposition Congress party, Rahul Gandhi, said anyone supporting the bill was “destroying India’s foundation”. And a leading regional politician Akhilesh Yadav called it a “divisive plot to divert attention” from the failures of the government.

But BJP leaders, including home minister Amit Shah, say the bill is not against Muslims.

“The Muslims of this country don’t have to worry about anything. But should the Muslims of Pakistan be made citizens? Should Muslims from Bangladesh and Afghanistan and the rest of the world also be given citizenship? The country cannot run like this. The citizenship will be given only to persecuted religious minorities only from these three countries,” Mr Shah said in parliament.