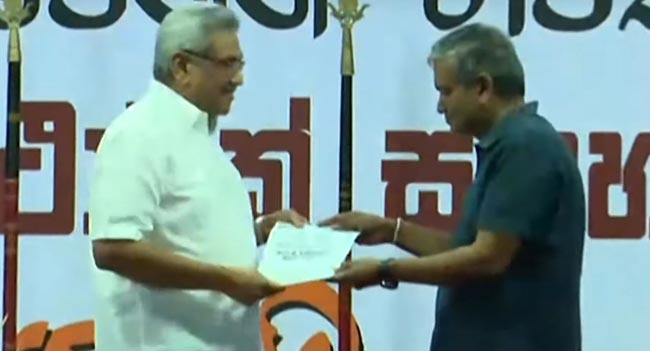 A set of proposals containing points to be taken into account when formulating a new Constitution has been presented to President Gotabaya Rajapaksa.

The proposals for a new Constitution compiled by the ‘Yuthukama’ organization under the theme ‘proposals to formulate a new Constitution for a strong state ‘ was presented to President Rajapaksa during a meeting held at the Sri Lanka Foundation Institute, Colombo, today (13).

The proposal has been prepared with five objectives; the rebuilding of the civilizational state, true public representation and the sovereignty of the people, consolidation of a unitary Sri Lanka, and ensuring the balance between the executive, the legislature and the judiciary and to build a society which values responsibilities.

The Chairman of the ‘Yuthukama’ organization Gevindu Kumaratunga presented the proposal to the President, stated President’s Media Division.

During the event, the President presented Felicitation Awards to Dr. Gunadasa Amarasekara and President’s Counsel Manohara de Silva in recognition of their service to the nation.