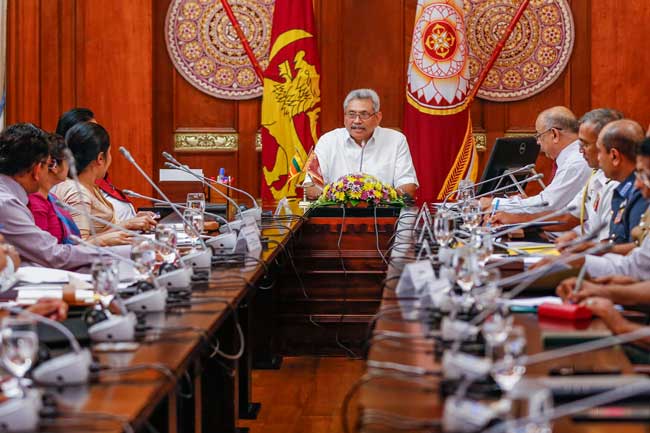 Visa for Europeans suspended; Sri Lankans arriving from Europe to be quarantined

Several firm decisions have been taken under the guidance of President Gotabaya Rajapaksa and Prime Minister Mahinda Rajapaksa to combat COVID -19 in the country, the President’s Media Division said.

“Measures initiated by the Government since January have been instrumental in preventing the disease coming into the country. Sri Lanka is in the forefront among the few countries that established a task force to tackle this global health threat,” it said.

President Gotabaya Rajapaksa and Prime Minister Mahinda Rajapaksa instructed officials to take every necessary action to develop and maintain this positive trend and to safeguard the well-being of the people in the country during a meeting on preventing the spread of COVID – 19 held at the Presidential Secretariat today (13).

President explaining the current global situation said the virus is rapidly invading many countries in Europe. The situation is rather serious in some countries such as France and Italy. Considering this development, President instructed officials to suspend issuing visa to people from European countries for 2 weeks.

It has also been decided to quarantine every Sri Lankan arriving from Europe for 14 days.

The progress of the investigations launched to identify people who were in contact with the two COVID – 19 patients who are currently undergoing medical treatments at IDH and their quarantine process were discussed in details. President issued directives to inquire about the places they visited and people they associated with and guide them for quarantine process.

It has been decided to restrict public gathering and functions to the maximum possible extent.

President said to establish the task Force at a permanent location and take decisions following gathering of information. Steps have also been taken with the assistance of the World Health Organization (WHO) to expedite the diagnosis process, President observed.

President Rajapaksa said that the WHO agreed to extend its cooperation towards the continuation of measures already taken by Sri Lanka to thwart further spreading of the disease.

During the meeting, the attention was drawn to regulate the distribution process of face masks in a manner that it could be purchased from anywhere. The President also advised the officials to facilitate the purchase of face masks at a controlled price. It was noted at the discussion that the firms, which can make 150,000 face masks daily, have been identified.

It has also been decided to disinfect buses and trains used for public transportation from tomorrow, (14). The security forces will provide assistance in this regard.

At present, China has successfully controlled the spread of COVID-19. China had given high priority to manage the social behaviours in a way that contributed to the effective control of the disease. Officials were advised to study the methods extensively that China has practised in this regard.

President Rajapaksa pointed out that the current situation should be used as an opportunity to experiment the possibility of continuing services provided by state institutions as well as conducting school and university studies resorting to internet.

The President stressed the importance of using electronic, print and social media to educate people about the disease but not to create a state of social confusion.