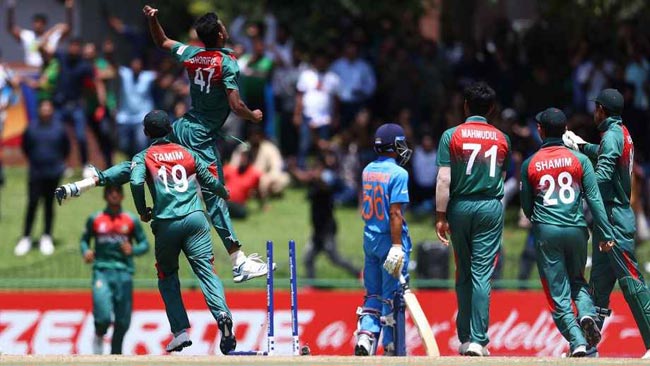 Yashasvi Jaiswal once again showed why he’s one to watch out for in the future, cracking 88 off 121 balls. But his dismissal set in motion an Indian collapse of seven wickets for the addition of just 21 runs in 7.4 overs for India to stop well short of where they would have wanted to be. In pursuit of 178, Bangladesh suffered a similar collapse, losing six wickets for 52, as both the sides seemed to be passing the trophy to each other. Till Akbar Ali, the Bangladesh captain, produced a rearguard to remember, taking Bangladesh across the line in a nervy finish, made more dramatic because of the weather.

Dropped catches, fumbles, overthrows, over-the-top appeals, and some verbal jousting added to the drama of the 2020 Under-19 World Cup final. Heck, rain made an appearance as well, leaving the sides scrambling for DLS calculations. After the weather cleared, the target was adjusted to 170, and Bangladesh needed seven off 30 balls with three wickets in hand.

Akbar and No.9 Rakibul Hasan rose above all the chaos upon resumption and coolly led Bangladesh to their first-ever ICC title at any level. It was Hasan who struck the winning runs, when he stepped out and launched the Under-19 Asia Cup hero Atharva Ankolekar over midwicket. The celebrations that followed were as crazy as the game itself.

Such a finish did not seem as likely when Bangladesh were well in front at 50 for 0 in the ninth over. Legspinner Ravi Bishnoi then let rip one wrong’un after another to send Bangladesh into a tailspin.

Parvez Hossain Emon, who had retired hurt on 25 in the 13th over, made a heroic return, much like how an injured Tamim Iqbal had done during the Asia Cup in 2018, and made a vital 47 off 79 balls to bring the target within Bangladesh’s reach.

Emon, who struggled to run between the wickets, popped in pills and laced left-arm seamer Akash Singh for a brace of cover-driven fours to ease the nerves in the Bangladesh camp.

Captain Priyam Garg then punted on Jaiswal’s part-time legspin, and he delivered by having Emon scooping a catch to short cover. This meant Bangladesh needed 35 off 108 balls (the equation was revised after the rain).

Ali, though, didn’t budge. He went 16 balls without scoring when he was on 32. But, he absorbed all the pressure, ran hard between the wickets and finished it off sensibly.

Shoriful Islam had also played a starring role in Bangladesh’s historic win. He bowled rip-roaring spells with both the new ball and the old one. He was electric in the field - and off his own bowling, too. Tanzim Hasan Sakib and Avishek Das, too, bowled intense spells as India’s batting line-up wilted in the face of relentless bowling.

After beefing up their pace pack and choosing to bowl, Islam set the scene, threatening both the inside and outside edges of Jaiswal. He backed that up by throwing death stares at the in-form Indian opener. Divyaansh Saxena, the other opener, was also skittish against the moving ball and tigerish fielding from Bangladesh gave India no respite. It was Das who made the first incision when he had Saxena carving a catch to backward point for a painstaking 2 off 17.

After seeing Saxena toss his wicket away, Jaiswal watched No. 3 Tilak Varma cop a fierce throw on the unprotected part of the knee and collapse onto the ground. Varma, though, shook the blow off and shored up India’s innings with a 94-run stand for the second wicket.

Bangladesh’s seamers continued to zip the ball around and Islam even had Jaiswal ducking and weaving, but the 18-year-old Indian opener showed great composure and overcame that tetchy start. By the end of the tenth over, India were 23 for 1, with Jaiswal on 14 off 35 balls.

The introduction of the slower bowlers afforded Jaiswal more breathing space. In all, Jaiswal scored 33 off 35 balls from Hasan and Shamim Hossain, reaching his fifth fifty-plus score in six games this tournament. Jaiswal raised the tempo after reaching the landmark, but Varma fell 12 shy of the mark when he scythed Sakib to Islam at deep backward point.

Suddenly, India’s largely untested middle order was up against a fired-up attack that was made to look even more potent by their fielders.

Islam, who already has the experience of eight first-class games and 12 T20s, showed off his range in the 40th over. He nailed an off-stump yorker, which was kept out by Jaiswal. Islam then unfurled a legcutter, but floated it down the leg side, with Jaiswal swatting it away to the fine-leg boundary. Islam then ramped up his pace to 130kph, hit a hard length and had Jaiswal flapping a catch to short midwicket.

After Jaiswal’s dismissal, India panicked so much that at one point Dhruv Jurel and Atharva Ankolekar were running towards the non-striker’s end. Eventually, it was Jurel, who was run out for 22 off 38 balls.

Having got rid of Jaiswal and Siddhesh Veer off successive balls, Islam was on a hat-trick, but it was averted. Islam, though, wasn’t done yet. He swooped in from his followthrough and ran out Bishnoi with a nifty under-arm throw and then fittingly closed out India’s innings when he completed a sprawling catch at deep third man.

Hours later, he would he celebrating wildly with his team-mates under firework-filled Potchefstroom skies.