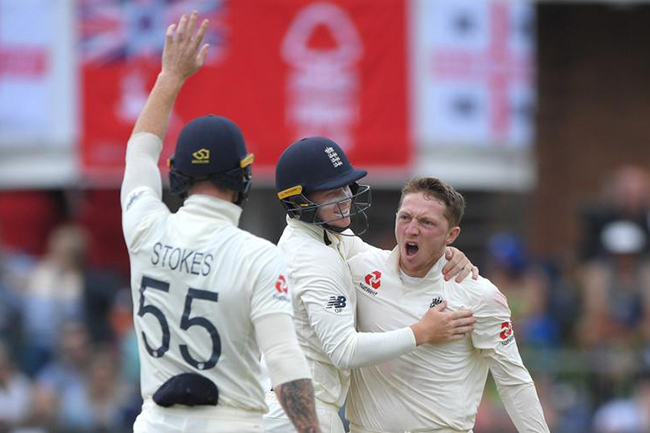 Offspinner Dom Bess claimed five wickets as England bowled out Sri Lanka for 135 after the hosts elected to bat in the opening test in Galle on Thursday.

Bess, who returned figures of 5-30, combined with paceman Stuart Broad, who took three wickets, as Sri Lanka were all out in two sessions before heading for an early tea.

It was the lowest first-innings score seen at Galle, well below Sri Lanka’s 181 against Pakistan in 2000.

The hosts suffered a pre-match jolt when skipper Dimuth Karunaratne was ruled out of the first of the two tests with a fractured thumb.

Stand-in-captain Dinesh Chandimal scored 28 and put up some resistance in a 56-run stand with Angelo Mathews, who made 27 on his return from a hamstring injury.

Broad struck twice in an over to send back opener Lahiru Thirimanne, who had scored four, and Kusal Mendis for nought to spell early trouble for the hosts.

The left-handed Thirimanne fell into a trap and was caught at leg slip, while Mendis edged behind to record his fourth successive duck.

Spin was introduced in the 11th over and Bess, with his second ball, got Kusal Perera for 20 when the batsman top-edged a reverse sweep to England captain Joe Root at first slip.

Sri Lanka had slumped to 25 for three but Mathews and Chandimal stood firm till lunch as England persisted with spinners Bess and Jack Leach bowling in tandem in the final phase of the morning session.

Broad came back in the second session to break the stand as he got Mathews caught at slip and Chandimal, who survived a dropped catch by debutant Dan Lawrence before lunch on 22, departed two balls later off Leach.

Mathews, whose hamstring injury kept him out of the 2-0 test series defeat in South Africa, went past 6 000 test runs duing his knock.

Bess soon ran through the lower and middle order with his off spin to claim his second five-wicket haul in his 11th test.

The series resumed behind closed doors after being aborted in the early phase of the coronavirus pandemic in March.