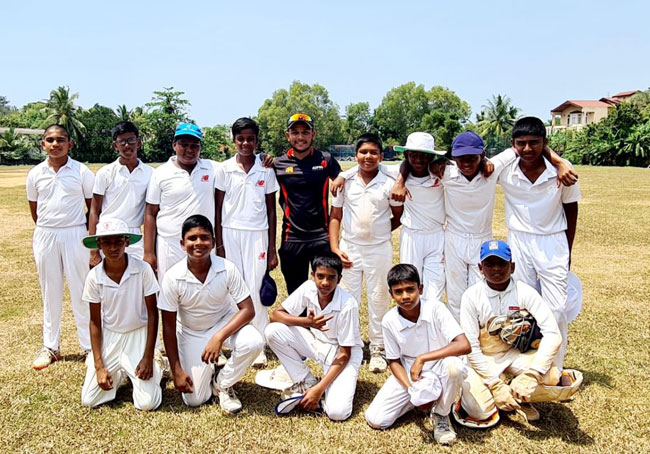 The Under-13 Inter-academy Cricket Tournament organized by the C. C. C. School of Cricket got underway at the C. M. S. Grounds in Kotte, today (21).

All major cricket academies in the country are invited to play in this prestigious annual tournament. This year, 20 teams play for the trophy under 4 groups.

Building on the solid platform laid by the Openers, the top-order batsmen Matheesha Nadul and Nethul Anuhas set the grounds blazing with a record – an unbroken partnership of 154 runs for the 3rd wicket.  Matheesha scored a whirlwind unbeaten 103 runs in 67 balls which included 2 towering sixes and 14 hits to the rope whilst his partner Nethul was unbeaten on 73, which included sweetly timed 11 boundaries.

Umal Weerasekera captured the only 2 wickets to fall of GPA.

Chasing a mammoth target of 263 in allotted 30 overs, the Colombo Premier Cricket Foundation team batsmen were all at sea against the disciplined bowling attack of GPA.

Only 3 of the Colombo Premier Cricket Foundation batsmen managed to get to double figures, the highest being 29 runs by opener Minuka Wijeratne.

The GPA bowling attack was led by the left-arm paceman A. J. Paranawidana, who took 2 for 16 in 5 overs. GPA right arm leg spinner Randiv Perera took 3 important wickets for 21 runs in his 5-over spell.

Left Arm spinner Nethul Anuhas was the pick of the bowlers, taking 3 for 20 in 6 overs. Nethul had an outstanding game with both the bat and the ball.

GPA wicket-keeper batsman Adeesha Maxwell was the star fieldsman who held on to 3 brilliant catches behind the wickets.

Next, GPA will play against Panadura Cricket Club on March 07 at the Panadura St. John’s grounds.