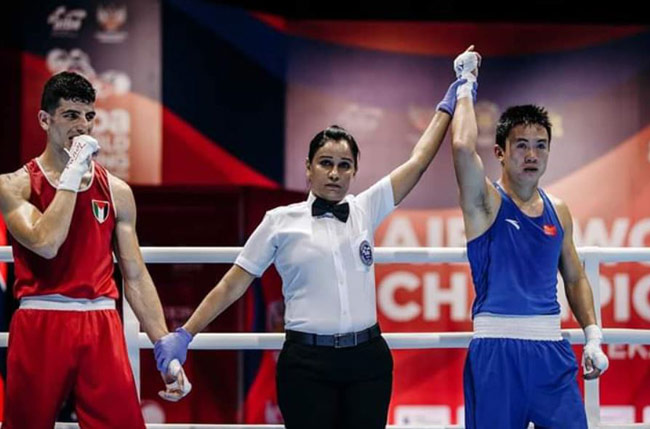 A Sri Lankan sportswoman has been selected to judge an Olympic gaming event for the first time in Sri Lanka’s sports history.

Accordingly, T. Nelka Shiromala, a Chief Inspector of the Sri Lanka Police, acts as a referee and a judge for the boxing event of the 2020 Olympic games held in Tokyo this year.

Following in the footsteps of her father, late Navy boxing champion Thambu Sampath, Shiromala took on the sport when women’s boxing was first introduced to Sri Lanka in 2000.

Her father tragically passed away while she was officiating the European Boxing Olympic Qualification Tournament in Paris last month.

Sri Lanka’s first-ever winner of Novices boxing tournament for women, Shiromala has claimed the runner-up title for five consecutive years at the national championships between 2001 and 2006.

Shiromala, who took up refereeing in 2009, made her international debut in 2011 at the Indonesian President’s Cup as the first Sri Lankan sportswoman to officiate an international sports event.

She went on to become the first woman 3-star referee in South Asia and South East Asia.

In 2017, Shiromala was also awarded as the best boxing judge in Asia.

She was the first female referee to officiate a sport from Sri Lanka at the Commonwealth Games in Gold Coast, Australia in 2018.