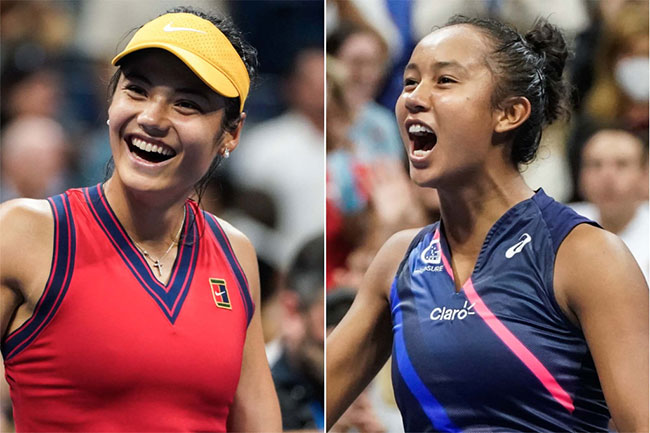 (CNN) The US Open women’s final will be a battle of the teens as Britain’s Emma Raducanu advances to her first major final by defeating No. 17 seed Maria Sakkari of Greece 6-1, 6-4 in the semifinals on Thursday night.

Raducanu, 18, will face 19-year-old Canadian Leylah Fernandez in the final at the Arthur Ashe Stadium on Saturday, making it the first major final between teenagers since the 1999 US Open when Serena Williams defeated Martina Hingis.

Both players have had stunning US Open runs that have already made history.

Raducanu, ranked 150th in the world, had to go through qualifying to get into the US Open main draw. She was the first qualifier to reach the US Open semifinals in the Open Era and it’s only her second appearance in a major. She has yet to drop a set in the tournament, including in the three rounds of qualifying.

On Saturday, she’ll be playing for not only her first major title, but her first title of any kind on the WTA Tour.

Following her match against Sakkari, Raducanu said she knew she would have to play some of her best tennis “if I wanted a chance.”

“I think today was always going to be a very difficult match, to play against Maria Sakkari. She’s an unbelievable player, probably one of the best athletes out there on tour,” Raducanu said in her post-match press conference. “Honestly, I think I played some of my best tennis today.”

Raducanu is also the youngest grand slam finalist since Maria Sharapova won Wimbledon in 2004. She aims to become the first British woman to win a major since Virginia Wade won Wimbledon in 1977.

In her US Open run, Raducanu has beaten two players ranked in the top 20: 18th-ranked Sakkari and No.12 Belinda Bencic.

On her blistering performance so far, Raducanu said it was “A surprise. Honestly, I just can’t believe it. A shock. Crazy. All of the above.”

“It means a lot to be here in this situation. I wanted obviously to be playing Grand Slams, but I didn’t know how soon that would be. To be in a Grand Slam final at this stage of my career, I have no words,” she said.

Fernandez, meanwhile, has been a giant killer, beating two former US Open champions in world No. 3 Naomi Osaka and No. 17 Angelique Kerber as well as beating No. 5 Elina Svitolina.

To reach the final, Fernandez defeated world No. 2 Aryna Sabalenka of Belarus in 7-6(3), 4-6, 6-4 on Thursday night at Arthur Ashe Stadium.

Following, her semi-final victory, Fernandez described her US Open experience as “magical.”

“I think one word that really stuck to me is ‘magical’ because not only is my run really good but also the way I’m playing right now,” she said in the post-match press conference.

“I’m just having fun, I’m trying to produce something for the crowd to enjoy. I’m glad that whatever I’m doing on court, the fans are loving it and I’m loving it, too. We’ll say it’s magical.”

Ranked 73rd heading into the US Open, Fernandez is expected to jump into the top 40 on Monday.

Excitement for the final is already brewing, with many people commenting on social media about how the match is a win for immigrant families.

Raducanu was born to a Romanian father and Chinese mother and Fernandez is the daughter of a Filipino Canadian mother and Ecuadorian father.

When told after her semi-final match that people in the Philippines have an interest in tennis now because of her, Fernandez said “wow.”

“I’m so happy to hear that everyone in the Philippines is cheering for me and supporting me. So thank you,” she said, adding that she was looking forward to eating her “lolo’s” (grandfather’s) Filipino cooking.

After her match, Raducanu said having a Chinese mom “definitely instilled from a young age hard work, discipline” and that she looked up to Chinese tennis star Li Na.

“When I was younger I would take a lot of inspiration from Li Na, even now just the way she was such a fierce competitor,” Raducanu said of the two-time grand slam winner.