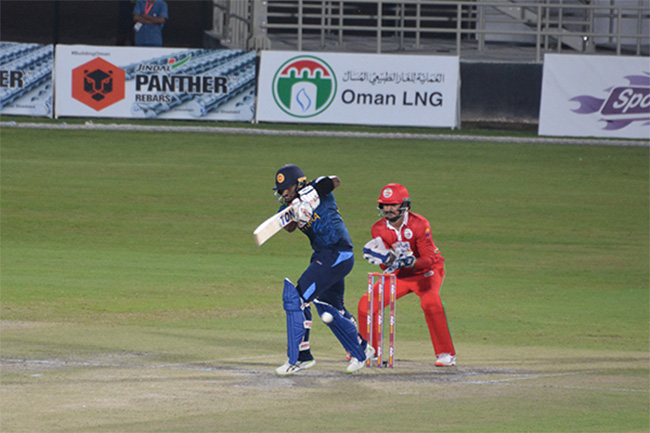 A defiant 74-run unbroken sixth wicket partnership between Bhanuka Rajapakse and Chamika Karunaratne first steered Sri Lanka to safety and then to a rather comfortable 5-wicket win over Oman in the second and final T20 match at Oman Cricket Academy ground in Al Amerat on Saturday.

Fighting to defend 158, Oman seemed to get under the tourists’ skin by reducing it to 89 for 5 from a dominating 87 for 2 in the space of six deliveries. Soon after pacer Kaleemullah trapped a well set Pathum Nissanka plumb in front for 26, Mohammad Nadeem struck twice in the next over to dismiss a dangerous Avishka Fernando (33 off 18) and captain Dasun Shanaka for nought in an eventful 11th over that did not concede any runs.

Oman, however, could not break the sixth wicket stand as the duo sealed the win in 17.3 overs.

Sri Lanka did win the two games it came to play in the Sultanate but left the country fully aware that beating Oman would require any international side to be on top of its game.

Playing before the biggest home crowd to date, Oman had a topsy turvy route to 158 for 9 with major contribution coming from Aqib Ilyas who rode his luck to strike a fluent 59 off 38. Having lost openers Jatinder Singh and Kayshap Prajapati for 36 inside 6 overs, Oman recovered somewhat through a 29-run third wicket partnership between Aqib and captain Zeeshan Maqsood before the latter was removed by Mahesh Theekshana for 16.

Southpaw Ayaan Khan and Aqib combined to add 59 for the fourth wicket, taking the score to 134 in the 17th over before the right-hander was dismissed by Karunarate. Aqib’s topscore of 59 included 4 sixes and three dropped catches.

Sri Lanka’s death overs specialist Lahiru Kumara came on to bowl the 18th over and derailed Oman’s trek to a robust total. He clean bowled the danger man Naseem Khushi, who had hit his first ball for six in the previous over, first ball and then yorked a well set Ayaan on the third ball for 20 off 26. When he had Mohammad Nadeem run out off a direct hit from Avishka Fernando on his fourth ball, Oman’s hopes of posting a big score on the board were gone too as it reeled to 146 for 7 from 140 for 4 in the previous over.

This was the last warm-up game for Oman before it starts its ICC T20 World Cup campaign against PNG on October 17 on its home ground.