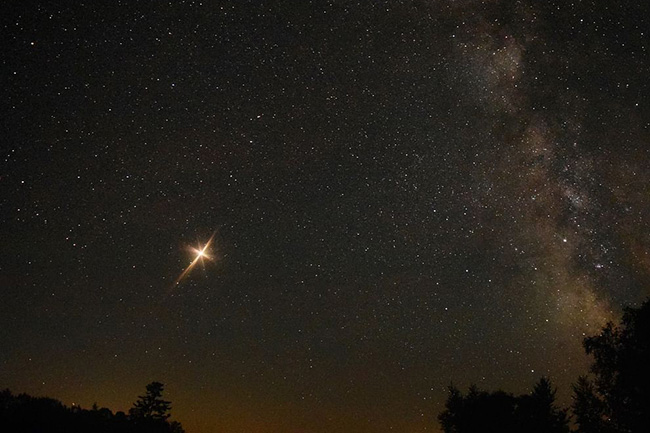 On December 21, a bright object will appear in the night’s sky. Astronomers have dubbed it the ‘Christmas Star’ due to it appearing over the festive season.

However, the astronomical object is not a star, but rather a conjunction of Saturn and Jupiter - the two largest planets in the solar system.

Both planets can easily be seen, as they will be the celestial bodies which look like stars next to the Moon.

From Earth’s perspective, the planet’s will be so close together that they will appear as one bright object.

On December 21, the planets will be so close together in the night’s sky that it will be the closest they have been since 1226.

The next time they will be that near to each other will come in 2080.

When the planets combine in the night’s sky, it is called the Great Conjunction.

The pair often appear together on average every 20 years or so, but rarely do they appear as close as they will on December 21.

Coincidentally, December 21 is also the Winter Solstice, hence why it has been dubbed the ‘Christmas Star’.

“During the event, Jupiter and Saturn will sit just 0.1 degrees apart, or a mere one-fifth the width of the Moon.

“In fact, Jupiter and Saturn will be so close that you will be able to fit them both in the same telescopic field of view.

“That’s an incredibly rare occurrence. The last time Jupiter and Saturn were this close together was in 1226 A.D., at a time when Genghis Khan was conquering large swaths of Asia, and Europe was still generations away from the Renaissance.

“Humanity won’t have to wait quite as long to see the solar system’s two largest planets repeat this month’s performance, though.

“Another Great Conjunction will occur in 2080. Of course, many of us alive today won’t be around then, so it would be wise to soak in this show while you can.”

Jupiter is by far the brightest, outshining Saturn by a factor of 12.

In fact, the gas giant will be the second brightest object in the sky, after only the Moon.

The pair will be easy to spot, as they will be the bright object next to the Moon.

Earthsky said: “At present, Jupiter and Saturn lodge about four degrees apart from one another on the sky’s dome.

“For reference, the width of two fingers at arm’s length approximates four degrees of sky.

“Day by day, Jupiter is moving closer and closer to Saturn on our sky’s dome now.

“These two giant worlds will meet for their glorious conjunction on December 21.