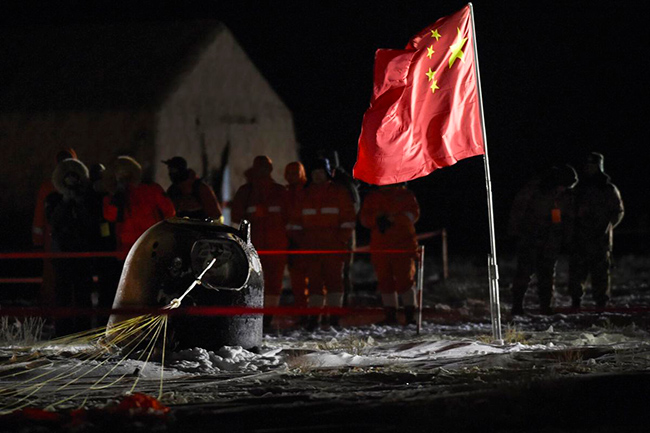 For the first time in more than four decades, humanity has brought moon rocks down to Earth.

The last such moon delivery came courtesy of the Soviet Union’s Luna 24 mission, which returned about 6 ounces (170 grams) of material in 1976. Chang’e 5’s haul should be much larger — about 4.4 lbs. (2 kilograms), if all went according to plan on the lunar surface.

The four-module, 18,100-lb. (8,200 kg) Chang’e 5 mission — China’s first-ever sample-return effort — launched on Nov. 23 and arrived in lunar orbit five days later. Two of the four modules, a lander and an attached ascent vehicle, touched down near Mons Rümker, a volcanic mountain in the moon’s huge Oceanus Procellarum (“Ocean of Storms”) region, on Dec. 1.

The solar-powered lander was equipped with cameras, ground-penetrating radar and an imaging spectrometer to take the measure of its surroundings. But the lander’s main job was to collect samples, which it busily did for the next two days, snagging stuff from the surface and from up to 6.5 feet (2 meters) underground.

On Dec. 3, this moon material launched aboard the ascent vehicle, which met up with the other two Chang’e 5 modules — an orbiter and a return capsule — in lunar orbit on Dec. 5. (The lift-off apparently damaged the lander, which stopped working on Dec. 3. But this was no great loss; the lander would have died on Dec. 11 anyway, when darkness descended on Mons Rümker.)

The Chang’e 5 team deorbited the ascent vehicle on Dec. 7, sending the craft back to the moon with a crash. Five days later, the orbiter and return capsule began the journey back to Earth, which culminated today with the capsule’s landing in Inner Mongolia.

Chang’e 5 was the latest mission in the Chang’e program of robotic lunar exploration, which is named after a moon goddess in Chinese mythology. Chang’e 1 and Chang’e 2 lofted moon orbiters in 2007 and 2010, respectively, and Chang’e 3 put a lander-rover duo down on the lunar nearside in December 2013.

Next up was Chang’e 5 T1, which launched a prototype return capsule around the moon in October 2014 to help prepare for the touchdown that occurred today. Then came Chang’e 4, which in January 2019 pulled off the first-ever soft landing on the moon’s mysterious farside. That touchdown involved a lander-rover pair, as with Chang’e 3.

The Chang’e 4 lander and rover are still going strong, as is Chang’e 3’s lander. (The Chang’e 3 rover died after 31 months of work on the lunar surface.)

With Chang’e 5’s apparent success — mission teams still need to inspect and assess the returned sample — China has become just the third nation to bring moon material to Earth. The other two are the Soviet Union and the United States, which hauled home about 842 lbs. (382 kg) of lunar rocks and dirt during the six Apollo surface missions between 1969 and 1972.

The Chang’e 5 samples should provide a new window into lunar history and evolution, scientists say, given that rocks in the Mons Rümker region are thought to have formed just 1.2 billion years ago or so.

“All of the volcanic rocks collected by Apollo were older than 3 billion years. And all of the young impact craters whose ages have been determined from the analysis of samples are younger than 1 billion years,” Bradley Jolliff, a planetary scientist at Washington University in St. Louis, said in a statement.

Today’s landing was the second such Earth return in just 11 days. On Dec. 5, the return capsule of Japan’s Hayabusa2 mission touched down in the Australian Outback with precious pieces of the near-Earth asteroid Ryugu. And there are more such cosmic deliveries coming: NASA’s OSIRIS-REx mission is scheduled to return samples of the near-Earth asteroid Bennu in September 2023.