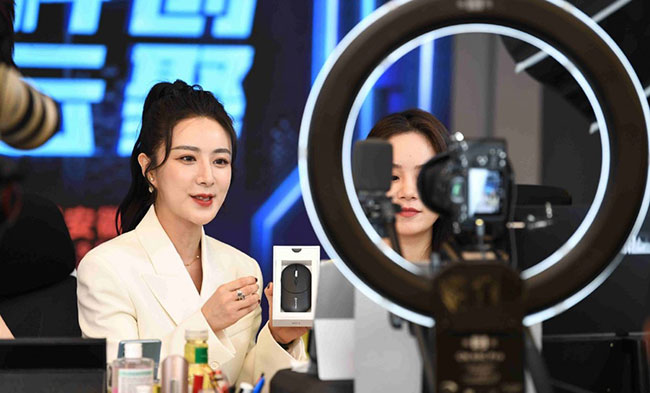 Chinese live-stream shopping influencer Huang Wei, known as Viya, has been hit with a whopping $210 million penalty for tax evasion and kicked off social media.

Viya — also known in China as the “live-streaming queen” — was ordered to pay 1.34 billion yuan in back taxes, late fees and fines, the State Taxation Administration said Monday on its website.

It’s the largest penalty ever imposed on a live-streamer, according to the Chinese state tabloid Global Times, and a sign that President Xi Jinping’s government won’t be letting up pressure on internet celebrities anytime soon.

From 2019 to 2020, Huang evaded more than 640 million yuan ($100 million) in taxes “by falsely reporting the commission income she earned from live-streaming platforms,” a tax official in Hangzhou said on Monday.

“If she can pay the tax, late fee and fine within the prescribed time limit, she will not be investigated for criminal accountability,” the official added. “If she fails ... the tax authority will transfer it to the police department for processing according to law.”

Huang had millions of followers on China’s major social media and shopping platforms — including Weibo, online shopping platform Taobao and TikTok’s China version Douyin — but her accounts were removed late on Monday.

“This account is banned due to the violation of the platform agreement,” a statement on Douyin read when CNN Business tried to view Huang’s account. Similarly, a statement on Weibo said her account was “not available.”

But in a Weibo post reviewed by CNN before her account was taken down, Huang said she was “deeply guilty.”

“Wrong is wrong, I am willing to bear all consequences for my mistake,” she added in the post.

Her husband Dong Haifeng also apologized on his Weibo account.

“I did not help Viya to do a good job,” he wrote. “I felt very guilty. As well as apologizing to the public, I should also apologize to my wife, Viya.”

It is not clear when Huang will be back online. In November, tax authorities slapped smaller fines on two other top shopping influencers and their accounts have still not been restored.

Huang, 36, became one of China’s most popular influencers over the last decade, helping to sell goods worth billions of yuan. She has also participated in public welfare activities organized by Alibaba-owned Taobao, by helping sell agricultural products from poorer areas, and has won government awards for her efforts.

Chinese authorities have intensified scrutiny of this powerful industry over the last few months. In August, the Ministry of Commerce outlined proposals for an “industry standard” for live-streamers who market products on online shopping platforms. The rules included details about how hosts on such shows should dress or speak in front of the camera.

China tech stocks fell in Hong Kong, as the news of the fine on Viya jolted the live-streaming industry in the region. Both Alibaba and Kuaishou Technology were down nearly 1.5%, while video-sharing website Bilibili plunged over 6%.

This crackdown on rich social media stars comes at a time when President Xi is determined to redistribute wealth in the world’s second-largest economy as part of his campaign for “common prosperity.”