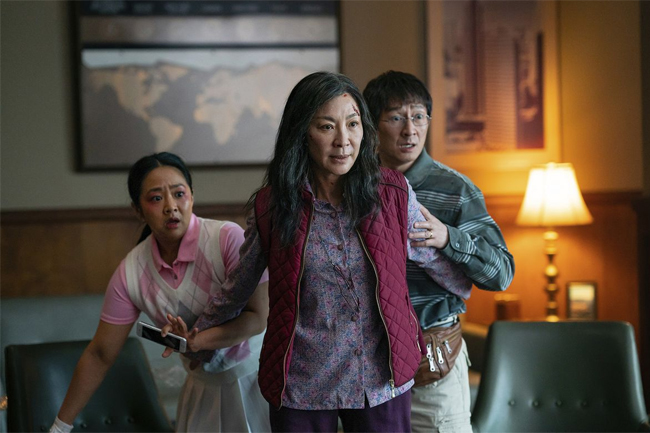 Oscars 2023: Everything Everywhere All At Once leads nominations

Everything Everywhere All At Once leads the field at this year’s Academy Awards, with 11 nominations.

The madcap adventure follows a woman, played by Michelle Yeoh, who hops through the multiverses as different versions of herself.

Other best picture nominees include Top Gun: Maverick, Avatar: The Way of Water and The Banshees of Inisherin.

Blanchett is nominated for leading actress for her performance in Tár, in which she plays a renowned orchestra conductor whose career starts to unravel when she is accused of abuse.

British actress Riseborough was an outsider to be nominated in the same category for her role in To Leslie, but enjoyed a late surge thanks to celebrity endorsements from the likes of Gwyneth Paltrow, Susan Sarandon and Jennifer Aniston.

Joining Blanchett and Riseborough on the shortlist are Yeoh, Michelle Williams (The Fablemans) and Ana de Armas (Blonde).

De Armas’ portrayal of Marilyn Monroe has split opinion, though - Blonde also had the dubious honour of picking up several Razzie nominations - for the worst films of the year - earlier this week.

Jamie Lee Curtis has received the first Oscar nomination of her long and varied career at 64, for her role as a tax inspector in Everything Everywhere All At Once.

The best supporting actress category also provides a nomination for Angela Bassett for Black Panther: Wakanda Forever, which makes her the first person to get an acting nod for a Marvel film.

Nighy has received his first Oscar nomination at the age of 73 for Living, in which he plays a civil servant whose outlook changes after he is diagnosed with a terminal illness.

It is a strong year for Ireland all-round. There was also a nomination in the best international film category for The Quiet Girl, about a shy young girl who goes to stay with her distant relatives for the summer.

It was also a strong year for actors of Asian descent, with four nominated - Yeoh, Ke Huy Quan, Stephanie Hsu and Hong Chau - the most in a single year.

Quan found fame as a child actor in the mid-1980s in The Goonies and Indiana Jones and the Temple of Doom but stopped acting when he found it hard to find roles. Everything Everywhere All At Once is his first major film for more than 30 years.

Viola Davis (The Woman King) and Danielle Deadwyler (Till) had both been tipped for nominations in the best actress race, but were notably snubbed by the Academy.

Top Gun’s Tom Cruise and Babylon stars Brad Pitt and Margot Robbie were among the other big names to miss out.

US actor Bryan Tyree Henry was a surprise inclusion on the supporting actor shortlist for playing a garage owner with a painful past opposite Jennifer Lawrence in Apple’s Causeway.

Paul Dano had been expected to appear in the same category for his turn in The Fabelmans, but missed out - although co-star Judd Hirsch did make the cut.

While it’s a good showing for Irish talent, Jessie Buckley also missed out on a best supporting actress nomination for her role in Women Talking.

Sarah Polley’s drama about abuse in a remote Mennonite community is the only film directed by a woman in the coveted best picture race - but no women were nominated in the best director category.

The other films up for best picture include German war epic All Quiet on the Western Front, Baz Luhrmann’s Elvis, Steven Spielberg’s The Fablemens, Todd Field’s Tar and Ruben Ostlund’s Cannes winner Triangle of Sadness.

In other categories, the BBC’s adaptation of Charlie Mackesy’s best-selling book The Boy, the Mole, the Fox and the Horse - which was on TV over Christmas - is nominated for best animated short film.