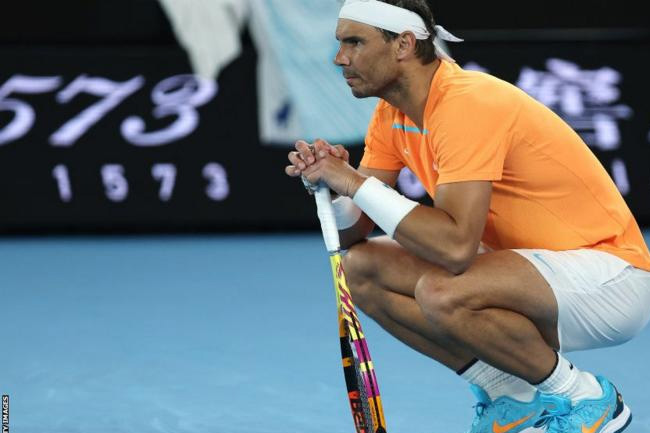 Rafael Nadal’s Australian Open title defence is over after a second-round defeat by American Mackenzie McDonald in which he struggled with an injury.

The Spaniard, 36, was trailing by a set and a break when he pulled up with what appeared to be a hip problem.

He took a medical timeout towards the end of the second set and continued with the match, but ultimately slipped to a 6-4 6-3 7-5 defeat.

It is Nadal’s earliest exit at the Australian Open since 2016.

It was a cruel end for Nadal after his stunning 2022, where he came back from two sets down to beat Daniil Medvedev in last year’s final in Melbourne and won a record-extending 14th French Open crown in June.

However, a typically battling display in the Wimbledon quarter-finals led to him picking up an abdominal injury that hampered him for the rest of the season.

He arrived in Melbourne having lost his only two singles matches of the season and never looked fully comfortable before he seemed to jar his hip against McDonald.

Nadal’s wife was left in tears and his support team also looked emotional in the player box as the two-time champion struggled to move on Rod Laver Arena.

After seeing the match through to the end he left to a standing ovation from the crowd, with Nadal turning to wave to each corner before exiting the stadium.

Nadal, bidding for a men’s record-extending 23rd Grand Slam singles title, arrived at the first major of the year having lost six of his past seven matches and with further questions about his future.

It is the latest in a long series of physical problems for Nadal, who admitted he had no feeling in his left foot during his victory at Roland Garros last year because of painkilling injections for the chronic injury.

He ignored his support box’s pleas for him to retire from his Wimbledon quarter-final against Taylor Fritz, where he somehow managed to win despite being unable to serve or move properly.

He subsequently withdrew from the tournament before his semi-final against Nick Kyrgios.

The abdominal injury he picked up at SW19 then hampered him at the US Open, where he suffered a fourth-round exit against Frances Tiafoe and appeared to injure his rib.

He came through a tough first-round test in Melbourne against Britain’s Jack Draper but against 65th-ranked McDonald his movement and speed appeared off.

Nadal was running out wide to pick up a forehand when he appeared to jar his left hip, immediately touching the area and dropping to his haunches.

He limped through the rest of the game and then left court for a medical timeout, returning to see out the second set.

Despite being unable to chase down any deep shots, Nadal somehow managed to hold serve until 5-5 in the third set before McDonald secured the inevitable break.

- With input from agencies